Via tor.com, a post by Marie Brennan about, as you can see from the title, things epic fantasy authors could learn from Dorothy Dunnett. 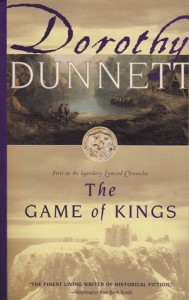 Marie Brennan points out how well Dunnett used omniscient pov, and what a good choice that was for her epic historicals.

The benefit this offers to an epic fantasy writer can be demonstrated any time Dunnett has to discuss the larger board on which her pieces are moving. She can, with a few elegantly-written paragraphs, remind the reader of the political and military forces moving in France, Spain, England and Scotland—and she can do it actively, with lines like this one:

“Charles of Spain, Holy Roman Emperor, fending off Islam at Prague and Lutherism in Germany and forcing recoil from the long, sticky fingers at the Vatican, cast a considering glance at heretic England.”

The plain expository version of that would be a good deal more dull, robbed of personality and movement, because it could not show you what the Holy Roman Emperor was doing: it could only tell you. To liven it up, the writer of third limited would need to make her characters have a conversation about Spanish politics, or else jump to a character who’s in a position to see such things on the ground. And that latter choice offers two pitfalls of its own: either the character in question is a nonentity, transparently employed only to get this information across, or he gets built up into a character worth following… which rapidly leads you down the primrose path of plot sprawl. (I was a longtime fan of the Wheel of Time; I know whereof I speak.)

Which is true. Although Brennan then points out the REALLY interesting thing Dunnett was doing with pov, which is: she never (fine, almost never) showed Lymond’s pov, even though he is actually the protagonist. It was the first time I had ever seen someone make a character into the primary protagonist without also making him into a pov character. The reader always sees Lymond from the outside. This allows Dunnett to conceal his motivations and thoughts from the reader as well as from the other characters. It is a technique that works extremely well.

It impressed the hell out of me, let me tell you.

I tried using that technique myself later, in fact, but that work, a long duology or maybe a trilogy, wasn’t picked up for publication. As I recall, two different editors said something on the close order of: “This is beautiful, but it’s too innovative and we don’t know if it will sell.” I have always suspected that redacting the protagonists pov probably contributed to why they felt that way. Marie Brennan’s comment on the technique is: “I wouldn’t recommend trying this nowadays; your editor would probably think you’ve lost your mind.” Why, yes, I think she could be right.

However, eventually that work will find a home or else I will self-publish it. It’s still one of my personal favorites, so leaving it in a drawer forever is not the plan. But, no rush. I have lots of other stuff coming out in the next few years.

Anyway, if you, like me, love Dunnett, you should click through and read the whole thing. If you haven’t actually tried the Lymond chronicles, well, I highly recommend ’em, but do go on past the second book. The first stands alone and is excellent by itself, but the second always felt like mere filler to me. Then the ball really gets rolling and I wouldn’t say any of the other books stand alone, so plan to go straight through to the end.

Why do you suppose Marie Brennan didn’t mention Phillipa as one of her important and impressive female characters? Because Phillipa is so young when she and Lymond first meet? I actually thought her development through the series was handled very well and quite believably. She’s a great favorite of mine — though of course I love Kate, too, and Sybilla. If you’ve read the Lymond chronicles, how did you feel about Phillipa? And about the way the romance subplot worked out through the course of the books?