Well, shoot, I didn’t expect to zip through the third book in the Wisteria Teahouse series quite that quickly. But I have to say . . . I think the series really hits its stride with this volume. I had a tough time putting it down.* 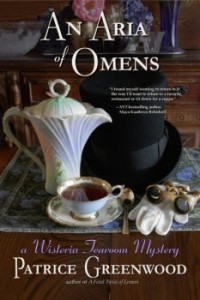 You know what? I’m not so very sure this particular installment in the series fits in the cozy mystery subgenre terribly well. A Fatal Twist of Lemon is light and charming. A Sprig of Blossomed Thorn is a bit less light, its action playing out against a thematically deeper background. And An Aria of Omens? Actually significantly darker and more serious. I like that, in fact, so though I enjoyed the first two, this one stood out for me.

It also had some really nice lines in it. This is the first volume where I found myself bookmarking pages so that I could mention them in a post. Like here, where one of the characters, an apprentice in an opera company, is explaining the plot of Serse by George Frideric Handel:

… Serse is enraged, and in this aria, he calls on the Furies to inspire him with their venom. He wants the world to turn to ash and the sun to be exclipsed by the heat of his fury. I’m sure we’ve all had days like that.

Beyond the nice writing, though, here’s where An Aria of Omens succeeds, and actually in quite surprising ways:

1. When Detective Aragon is bouncing ideas about the murder off Ellen, even though he is not supposed to talk about these kinds of things with non-colleagues, it actually makes sense that he would be doing that. It makes sense on a personal level and it also makes sense on a professional-cop level. That’s hard to pull off; I generally don’t really believe it unless the detective and the female lead are married and have been a long time or something like that. Making it work by making the detective stupid is just offensive. But Greenwood totally made me believe in this interaction between Tony and Ellen. I was impressed.

2. I actually thought the murderer was someone else for quite some time. I had the murderer and the motive both wrong.

3. I did not expect the second victim, but not only was her death one of the things that misled me, it worked really well to give this story a deeper, sadder, less cozy and more real flavor.

4. At the end, after it’s clear who the murderer is, the author does not force Ellen into peril so as to have her rescued in a climactic scene. Not even so that she can rescue herself or someone else. Nope, Ellen stays away from the murderer, stays around other people, keeps herself safe, and the murderer is arrested offstage while she and most of the important secondary characters are busy dealing with their own lives. I thought that was just fantastic. Also, Greenwood has made me interested in the details of daily life, so I didn’t feel cheated of action by having no fast-paced climactic violent scene at the end.

Where else the story succeeds:

The relationship between Ellen and Tony Aragon is still in the process of development. This definitely is the opposite of the insta-love trope. There are real obstacles between the two — not only is she Anglo and he Hispanic, which in Santa Fe, as we saw in the second book, apparently creates potential problems — but also the other differences in their backgrounds can’t be fluffed lightly out of the way. I love how Greenwood is handling this element of the series. And I’m pleased on a detail level that Greenwood is not pushing Ellen’s dislike of Tony carrying a gun in this story, at least not very much. Especially because the murderer in this one is plainly very dangerous.

Greenwood has set a number of hooks that make me curious about minor plot elements. Generally with just a couple of words or a line or two, she makes me feel like I really want to know what is up with this or that. How *about* that ghost? Man, that counselor is a bit weird. And so on. Also, I’m just more and more pleased with the setting, and I don’t even like tea.

Almonds aren’t my personal favorite, either, but it was a *very* good idea to provide the recipe for the Aria Cake in the back of the book. Food is so important in these books that Greenwood should definitely provide at least one recipe per book. Mmm.

Anyway, the first book was good, the second was also good, and this one was excellent. I preordered the next book in the series, which I see is due out in just a couple of weeks, so that’s timely.

* I did manage to get my minimum words for my own WIP done for yesterday. But barely. Eh, books that are not just readable but compelling, not actually what I need right now. Switching mostly back to nonfiction for a while.

1 Comment → Recent Reading: An Aria of Omens by Patrice Greenwood