The first day my tearoom opened was wonderful – mostly. Funny how life can go swimmingly one moment and fall to pieces the next. 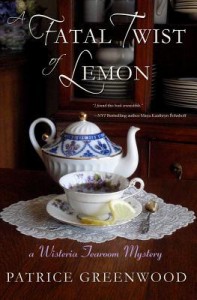 So, a cozy mystery. I picked it up, in the sense of opening the kindle file that’s been sitting here for quite a while, because I wanted to read something with a plot, but not something that would get in my way while I work on my own project. A contemporary cozy mystery fit the bill. It would have been even better for the purpose if I hadn’t liked it particularly, but in fact I foundA Fatal Twist of Lemon had a good deal of charm. The writing is good, the setting seems well drawn although I’m not familiar with Santa Fe, the characters are appealing, and the mystery itself is . . . well, not that mysterious, but on the other hand, though I was not surprised to find out who the culprit was, I also wouldn’t have been surprised if it had been someone else, so I guess actually the red herrings were fairly effective. Also, I don’t read mysteries for the mystery per se. I read mysteries almost entirely for character and setting.

The main character, Ellen, has just opened the Wisteria Tearoom in a nice area of Santa Fe. The whole point, as far as Ellen is concerned, is to create a beautiful, peaceful, Victorian setting in which people can settle down for a civilized afternoon tea. To this purpose, she offers elegant decor, fresh flowers, and above all delightful food, which incidentally is described in the most mouthwatering terms.

The murder of one of the tearoom’s first patrons is a bit of a setback for establishing the desired atmosphere, as you might imagine. The ghost who sets the bobbles on the chandelier swaying, however, is a nice addition to the decor. I rather enjoyed the ghost.

Since this is a modern cozy mystery, we would expect an important romantic component. Detective Aragón is pretty offensive at the beginning, so much so that I thought it was going to be a bit of a trick to handle the shift, obviously coming up, from annoying-jackass-cop to sympathetic-male-lead. The author pulled it off, though, and rather more effectively than I expected.

In a cozy mystery, one of the challenges is to have the main character, who is not a cop, solve the mystery, without making the cops look like total morons. Greenwood managed this because just about every time Ellen discovered a tidbit of information and passed it on to Detective Aragón, he already knew it. The bit of information that actually solved the crime was reasonably something the police might not have known. The way Ellen put herself in danger at the last minute was intensely stupid, but I suppose not completely unreasonable given the sort of person she is. Though I would have preferred her not to do that. Honestly.

Anyway, I went on and picked up the second book, A Sprig of Blossomed Thorn, which incidentally is a wonderful title. I liked that one, too. We get to see all the characters develop and deepen, which is one of the main pleasures of a cozy mystery series. I’m particularly interested in seeing what’s going on with Kris, the business manager of the tearoom.

Racism plays an important role in developing the plot of the second book, but thank heaven, the story doesn’t come across as heavy-handed Message Fiction, which is actually quite an accomplishment these days, where too often The Message is piled on with a shovel, as though the author believes the point of telling a story is to show off how progressive she is. That wasn’t the case here. The setting really helped with that. I’m still not familiar with Santa Fe, but I can believe that the racial tensions in the area are exactly as portrayed in the book.

I’m going to go ahead and pick up the third book, um . . . okay, An Aria of Omens, and we’ll see where Greenwood takes that one. I will say that if Tony Aragón stops wearing his gun off-duty to please Ellen, I am going to be annoyed. For a different kind of male lead, that might work, but no one knows better than a cop that you *just never know* when a bad guy is going to start shooting up, say, the opera house. I don’t believe for one second that any competent cop would give way to the idea that it’s better to be unarmed in the face of disaster, even if he’s attracted to a woman whose life has been sufficiently protected that she doesn’t really believe violence is possible. Which she should be getting over, what with having had two women murdered in her immediate vicinity in the recent past.

In the meantime, reading this series makes me seriously want some scones. I’m doing a no-carb week, alas, but next week, these, from the King Arthur Flour Whole Grain Baking cookbook, are probably going to make an appearance:

Whisk together dry ingredients. Cut the butter in with a pastry cutter. Stir in the coconut. Whisk together the egg, coconut milk, and extracts. Add to dry mixture and stir just to combine. Add the chocolate chips. Turn out onto a work surface and knead a couple of times to bring the dough together. Divide in half and place each lump on a parchment-lined baking sheet. Pat the dough into two circles about ½ inch thick and 6 inches in diameter. Cut each circle into 8 wedges.

Now, either bake the scones or slide the whole baking sheet into the freezer. Scones don’t hold over well, so you may not want to bake the whole batch; but the dough freezes well (as Greenwood indicates in her book, btw, and she is perfectly right), so you can cut the dough into wedges, freeze it, wrap the wedges in plastic wrap and put them in a freezer bag, then keep them frozen till right before you want to bake them. This barely changes the baking time, though of course they will take just a bit longer. There’s no need to thaw the dough before baking.

Before baking, brush with milk and sprinkle with coconut. Bake at 375 degrees for 20 minutes or a bit longer. If you want to make a chocolate glaze, well, it’s probably not necessary, but hey, I won’t judge.