So, I’ve had more time to read recently than I expected, so I finally had a chance to try a book I’ve been dying to pick up since reading its opening prologue: BEAUTY QUEENS by Libba Bray. 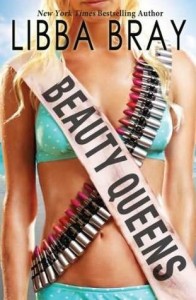 Here’s the opening paragraph from the prologue:

A Word From Your Sponsor

This book begins with a plane crash. We do not want you to worry about this. According to the US Department of Unnecessary Statistics, your chances of dying in a plane crash are one in half a million. Whereas your chances of losing your bathing suit bottoms in a strong tide are two to one. So, all in all, it’s safer to fly than to go to the beach. As we said, this book begins with a plane crash. But there are survivors. You see? Already it’s a happy tale. They are all beauty queen contestants. You do not need to know their names here. But you will get to know them. They are all such nice girls. Yes, they are nice, happy, shining, patriotic girls who happen to have interest in baton twirling, sign language, AIDS prevention in the animal population, the ancient preparation of poppadum, feminine firearms, interpretive dance, and sequins. Such a happy story. And shiny, too.

You see? Who could resist a beginning like that?

Okay, I liked BEAUTY QUEENS a lot. But despite that beginning, which implies certain things about the story, it was not quite what I was expecting. See, I was expecting a story. BEAUTY QUEENS is so very much a satire that the “story” aspects kind of get reduced to serve the ends of the satire. Which is fine, but as I say, it took me a bit by surprise.

Part of the appeal of this book is its sheer ridiculousness. I’m not sure I’ve ever read a book which was so deliberately preposterous on the surface and so serious about acerbic social commentary underneath.

In BEAUTY QUEENS, we have not only the beauty queen contestants, but pirates – oh, I mean actors from a TV reality show dressed up as pirates. And secret installations built by evil corporations, manned by secret agents right out of a James Bond movie (except more ridiculous). Tanks full of piranhas to lower people into! Crazy dictators! Totem poles! Exploding skin cream! Giant snakes! Mystical powers! A girl who walks around for the whole book with half a serving tray stuck out of her skull because of the plane crash. But don’t worry, she’s fine!

And all of this is thrown madly together with writing that is good, but also deliberately silly.

Here, for example, is a passage that made me laugh:

The agent crept back to the catamaran stashed behind the rocks and paddled through the rough surf to the far side of the island. As he walked onto the beach, a sudden hiss-growl came from the right. A nearly extinct bred of giant snake particular to the island leapt onto the sand, blocking his path. It puffed out its Elizabethan ruff of colorful neck webbing in warning, and with a terrifying hiss-screech, it lunged.

In this book, we not infrequently have immense snakes lunge, leap, roar, bite people in two, swallow girls whole in an instant, etc. I’m sure many, many other details were equally ridiculous, but for me, the giant snakes were practically the apex of ridiculousness. It is, of course, not possible that Libba Bray actually thinks giant snakes could act like this. The silliness has a certain charm, and it allows the reader to enjoy the pointedly comedic qualities of the satire, but it is not a quality which lends itself to getting lost in a story. You can’t believe in it for a minute.

I want to emphasize that the writing *is* good. Listen to this – this is right after the snake swallowed the girl:

“Oh my God. I thought you were a total goner, man. But you were all, ‘Feel my fists of fury, Amphibian Bitch,’ and I was all, ‘Let’s settle this, X-Men-style,’ and you were all, ‘Kayaaaaa spear time!’ and oh my God, that was flippin’ amazing. Wasn’t that amazing? I haven’t felt so good since I punched Dennis Anastasias during sixth grade recess when he called me thunder thighs ‘cause, I’m sorry, that little punk had it coming.” Laughing maniacally, Jennifer combed her hands through her snake-slimed, muddy hair and looked up at the doily of sky far above, and even though she had just nearly met her demise with a gigantic snake on a deserted island far from home, somehow this moment was glorious.

Isn’t that delightful? The whole thing is so silly it didn’t even bother me to have a character call a snake an amphibian. I also never worried for a second about the girl who got swallowed by the snake. Partly this is because comic book rules pretty much apply. Or you could say, Roger Rabbit rules apply. There’s likely to be a giant snake or quicksand or a tankful of piranhas wherever you turn, but it’s not like anybody’s actually going to get swallowed whole or drown or get nibbled to death.

Beyond that, worrying about the characters? Not even relevant, because they are not actually characters so much as Satiric Poses. We have The Token Black Girl and The Other Brown Girl, The Wild Girl and The Freethinker, The Lesbian and The Transsexual and so on and so forth. Everyone is there to play a role, not to be taken seriously as a person, which is kind of ironic in a way since their character arcs all start with Being Victimized By A Society That Expects Girls To Be Pretty And Vacuous and move through gaining confidence and deciding that they’re allowed to be real people, even if their personal goals don’t involve Normal Girl Roles. It’s not that Bray isn’t skewering real aspects of modern society. It’s that, when you make your satire THIS pointed, you’re not really telling a story anymore.

So . . . I liked this book a lot. I liked the writing and the jokes and the pointed commentary and perhaps most of all the Charles Dickens puns, which I didn’t see coming at all – that was really funny. I liked the characters, such as they were, and the ludicrous plot, and the preposterous snakes. But it wasn’t, after all, the kind of book I’d assign to read next to LORD OF THE FLIES. It might be one to assign in a unit on satire. I might well read it again eventually, and sure, I’d recommend it to readers – in fact, I do, if it sounds like something you’d enjoy – but it will never be a book I think of when I’m looking for a great *story.*

If you’ve read this one, I’m really curious: what did you think?