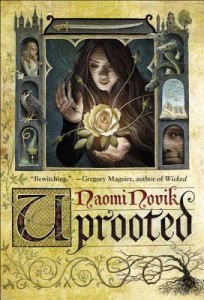 What this book is: really, really good. Outstanding. Is it being presented as YA? It could be read as YA or adult. Nieshka’s arc is a YA character arc, but this is a complex story with plenty of depth. It’s definitely going to appeal to readers of all ages.

What this book is: by Naomi Novik.

What this book is not: even faintly reminiscent of the Temeraire series. You know, when I read TEMERAIRE, I said to myself, “Just look at all these semicolons! Novik’s overdone it. She’s really captured Jane Austen-style language generally, but Austen definitely did not use a zillion semicolons per paragraph like this.” Then I went and opened up some book or other by Austen and you know what? Yes, she did.

What I mean to say is, Naomi Novik honestly did capture Austen-style language in the Temeraire series. And since before UPROOTED, she’d written nothing but that series, it was impossible to tell what her natural writing style might be like. Well, I guess she might switch and switch again, who knows, but UPROOTED is written in a style that reminds me a lot of Robin McKinley. If it had McKinley’s name on the cover, I’d have believed it was hers. It’s a smooth, straightforward writing style that doesn’t call attention to itself. It’s the kind of writing that gets out of the way and lets you fall right into the story. It starts like this:

Our Dragon doesn’t eat the girls he takes, no matter what stories they tell outside our valley. We hear them sometimes, from travelers passing through. They talk as though we were doing human sacrifice, and he were a real dragon. Of course that’s not true: he may be a wizard and immortal, but he’s still a man, and our fathers would band together and kill him if he wanted to eat one of us every ten years. He protects us against the Wood, and we’re grateful, but not that grateful.

What this book is: a dark fairy tale.

What this book is not: a pastoral fantasy, in the sense that Sherwood Smith used the term in her recent post at Book View Café. Oh, there is an enchanted wood. There sure is. And it is certainly very powerful. But it is the most malevolent enchanted wood you can possibly imagine. It is so malignant that anybody who sets foot in its shade and takes a breath of its air is likely to be inextricably corrupted and try to kill everyone. That scene where the village cows get corrupted and turn evil? Yeah, sounds funny, but actually no, it is seriously horrific. I definitely see why some reviewers are setting UPROOTED in the horror category. I wouldn’t go that far, quite, but as far as I’m concerned, despite the otherwise bucolic village setting and the ordinary forest through which it’s safe to ramble, this story is shoved firmly out of the Pastoral Fantasy category by its horror aspects.

What this book is: compulsively readable, with wonderful characterization and wonderful writing.

What this book is not: flawless. I truly appreciate a story with a theme of redemption. There’s almost no other theme that appeals to me more. But the Wood was SO malevolent in this story that I had trouble believing in the ending. I’m curious: if you’ve read this book, what did you think of the ending? In very general terms, please: no actual spoilers.

What I did not think quuuiiite worked: this setting was supposed to be Eastern European-ish, but in fact it was a thoroughly generic fantasy setting (*extremely* well done, but generic). I guess the names were sort of Eastern European-ish, but they did not really strike me that way. Every time Nieshka cooked buckwheat or ate a blini or whatever, I was just a little bit startled. Maybe this was just me, but one writer who I think manages to pull off this kind of setting just a little better is Merrie Haskell. To me, her settings feel just a little more grounded in historical settings.

Rating: Five out of five. Nine and a half out of ten.

Probability that I’ll re-read this: 100%, probably as soon as next year.

Chance that I’ll send a copy to someone just cause I must share the love: I already have. I did that before I had quite finished the book myself.

Chance that I’ll nominate this for awards next year: Very, very likely, and it’s got enough buzz that I think it has a good chance of picking up a lot of nominations.

Chance that I’ll keep an eye out for Naomi Novik’s next book: Are you kidding? Absolutely.

What I want Novik to write next: something SF. I think it would be fun to see what she’d do with a space opera type of story. Or something with a hard-boiled noir tone. It’s fascinating to me to see her write in such madly disparate styles, so it would be neat if she’d try that again.