So, I had a chance to read the second set of stories and novellas this past weekend, yay! There are two novellas in this collection, “The Dead City” and “The Dark Earth Below.” There are also several short stories. 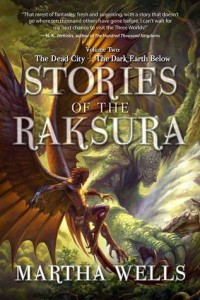 Here, in brief, is what you get in this collection:

The first novella is set shortly after Moon’s first encounter with the Fell – you remember, when the Fell destroyed the city of Saraseil, Moon went to a Fell ruler because he thought he might be Fell himself? And then lots of the plot of the actual trilogy arises because of that meeting. Well, in “The Dead City,” Moon has not yet even begun to recover from meeting the Fell ruler or from the destruction of Saraseil. He’s angry, bitter, and on the edge of despair.

All that emotional distress is what drives this novella. It’s a good one. Of all the secondary characters in this one, I liked Ghatli – everyone’s going to like Ghatli, I expect. She’s one of the few non-Raksura who’s heard of Fell but is still able to accept a Raksura. As for scenery, you know it’s going to be ornate and large-scale because after all this is Martha Wells we’re talking about. So we have a huge buried city; buried for a rather unexpected reason and now being excavated for a thoroughly peculiar and pretty appalling reason. Anyway, Moon helps solve the problem mostly because he is just so tired of watching vicious predatory species slaughter people who don’t really have the ability to fight back. Then he goes on his way. Structurally, this story is totally a western: a small community faces an enemy beyond their strength, the lone hero rides in (or flies, in this case), rallies the townspeople, defeats the bad guys, and rides off again, still alone. It’s a little more complicated than that, but yeah, basically a western. I liked it a lot. It takes up about 30% of the book.

Then we get “Mimesis,” which is my favorite of the three short stories included in this collection. I don’t find its biology particularly persuasive, but on the other hand Raksura have magic biology too and I don’t have a problem with that, so hey. This story is from Jade’s pov and Moon is not featured.

Then we get “Trading Lesson,” which I’d read before somewhere, maybe on Martha Wells’ website, I don’t know. It’s a minor story, nothing wrong with it, but minor.

The final short story is “The Almost Last Voyage of the Wind-Ship Escarpment.” It doesn’t include any of the familiar Raksura characters, or in fact any of the characters we’ve ever met. I liked it, though. It could be expanded, if Wells’ ever wanted to play with it some more. Everybody’s backstory is complicated enough to be fun to play with, especially Flaren. You know, the Three Words are a pretty dangerous place. But – spoiler – the Wind-Ship Escarpment does in fact survive.

The three short stories together take up not quite 20% of the book, so that leaves half of the total length for the second novella, “The Dark Earth Below.” I loved this novella. All these stories are arranged in chronological order, so this one is set last, later than the trilogy. For the first time, I feel that Wells has reached an acceptable stopping place for the Raksura series. Which doesn’t mean that I wouldn’t happily snap up another trilogy or as many other stories as she wanted to write in this world. But this story involves the birth of Moon and Jade’s first clutch. This brings us to a natural stopping point.

Of course, that’s not all it involves, or it would hardly be half the length of a novel. We get more ornate magical biology and a peculiar mystery that poses a pretty serious threat to the Raksura colony. While all that is being sorted out, Jade is still very pregnant and is not at all happy. Stone has always been one of my favorite secondary characters and I’m glad to say he’s around; Pearl has never been extremely sympathetic but she shows to advantage in this novella. We get glimpses of Frost, Thorn, and Bitter – you remember the three youngsters from Sky Copper – among others. Basically we are shown enough to be sure that the colony is in much better shape now than it has been in the recent past. That, too, is important for letting the reader get a sense of closure.

Naturally the mystery is solved . . . I am not sure I would have figured everything out, but magical biology is just, well, hard to figure out sometimes, I guess. I also like how the Kek are presented here. Any Raksura colony that doesn’t have a Kek village living beneath its tree probably is at a disadvantage. I will add that I do feel bad for the Onde, both the whole population and particularly the individual featured in this novella.

But – another spoiler, I know – the clutch of babies is fine. Three females and two males. I’ll go ahead and give you their names: Solace, Sapphire, Fern, Cloud, and Rain. A thoroughly satisfying clutch, and I’m sure the first of many. Can’t you just see Moon as a line-grandfather someday, with great-great-great-grandchildren living in a flourishing colony? I definitely can. I’m pretty sure that we’re supposed to be left with a happily-ever-after future scrolling out ahead of us. And we are. So, as I say, a satisfying ending point for the series.

Now I kind of want to go re-read the trilogy, though. Again.