So, Martha Wells has a post up at tor.com: Five books about exploring and communicating with alien cultures.

What a great topic, right? I mean, it instantly catches MY eye, for sure.

Leviathan’s Deep by Jayge Carr. I read this several times years ago. I really loved it and I’m sure I still have my copy. Now I really want to re-read it. It’s from the pov of one of the aliens — their world has more or less been conquered by humans, and we see everything from their perspective. Carr flipped gender roles for her species, but imo she did cheat a bit. But maybe not. Anyway, well worth checking it out if you’ve never read it and you’re into alien species and the interface between humans and aliens.

Survivor by Octavia E Butler. If I remember correctly, this was not one of Butler’s personal favorites and she refused to re-issue it. On the other hand, I loved it and read it to pieces. It has a problematical relationship in it . . . but this is Butler, who managed to pull it off. At least imo.

The Pride of Chanur by CJC. Of course. You could hardly leave that one out of a list of this kind. Space opera adventure! With complicated politics and some of the best aliens anywhere in SF.

Hellspark by Janet Kagan. Yes! So pleased to see this book get a mention. As a murder mystery, not the very most mysterious imo. But as a novel about communication and the interface between humans and aliens, it’s hard to beat. Two different kinds of aliens, if you count the AI, who is super charming and one of the best characters in the story. 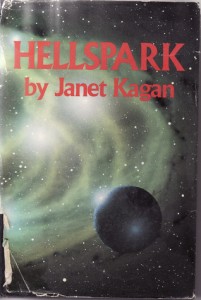 Uhura’s Song by Janet Kagan. I agree again. This is a wonderful Star Trek tie-in novel, one of my very very favorites, and the communication-with-aliens aspect is certainly central to the story. Not only does Kagan do a good job capturing the feel of the standard Star Trek characters, which I could never do, but she also introduces a wonderful new one-off character just for this book.

I should mention that Kagan’s third book — these were unfortunately the only three she ever wrote as far as I know — Mirabile, a set of linked novellas, is also a lot of fun, although only sorta-kinda believable from a genetics standpoint.

Anyway, then Wells finishes off with:

A Judgment of Dragons by Phyllis Gotlieb. I have never read this one, but considering the company it’s keeping, plainly I must rectify this immediately. It’s not available on Kindle, but it is in paper, so whatever, that’s my TBR shelves are for.

Okay! Moving on from Wells’ suggestions, let me add to this list:

Cuckoo’s Egg by CJC. If you are interested in alien species and human-alien communication, this is a must-read standalone short novel.

The Faded Sun trilogy by CJC. I’m not so sure mri are THAT alien. One might have written that book and made them a human population and I’m not sure it would have changed anything much. But, still, they’re supposed to be alien. Plus there are the regul.

The Foreigner series by CJC. Hello? Communication? Between humans and aliens? This is that.

Okay, okay, who besides Cherryh? How about —

Ancillary Justice by Ann Leckie. Breq is not human. This series counts.

Chess With a Dragon by David Gerrold. It’s been a long time since I read it, but I remember liking this book quite a bit.

Spacepaw by Gordon Dickson. I was never a huge Dickson fan, but I liked this one and thought the aliens — bear-like — were surprisingly well done.

Okay, anybody else have one I missed? Toss it in the comments, please!

18 thoughts on “Books about communicating with aliens”