You recall a few days ago that I mentioned I’m interested in whatever James Cambias wrote next after A DARKLING SEA. Well, it turns out that his newest title just hit the shelves yesterday. 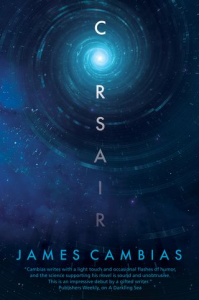 In the early 2020s, two young, genius computer hackers, Elizabeth Santiago and David Schwartz, meet at MIT and have a brief affair. Elizabeth dreams of technology and space travel and takes a military job after graduating. Nearly ten years later, David is setting himself to become a billionaire by working in the shadows for international thieves, and Elizabeth works in intelligence preventing international space piracy. Robotic mining shipments from space are dropped down the gravity well into the oceans. If David can nudge a shipment 500 miles off its target, his employers can get there first and claim it legally in the open sea. When Elizabeth loses a major shipment, she leaves government employ to work for a private space company to find a better way to protect shipments. International piracy has very high stakes and some very evil players. And both Elizabeth and David end up in a world of trouble.

I am not, as it happens, super-interested in near-future thrillers . . . except for Patrick Lee’s books . . . and I am disappointed that there are (probably) no alien species in CORSAIR. Still, I am interested to see what Cambias has done with this book.