Interrupting one book to read another is very rare for me. Almost unheard of. In fact, stopping in the middle of one book to read something else almost always means the first one is a DNF because even if I meant to go back to it, I probably won’t.

But Newman’s ICE CREAM STAR is an exception. I’m halfway through it, and so far I’m really enjoying it, although it’s pretty intense. The setting is pretty brutal, as you might expect for a postapocalyptic everyone-dies-before-twenty kind of setting. Which turns out to not quite be true, but anyway, comments on that book when I’m actually finished with it.

I was talking to somebody on Friday about Patricia Briggs’ short story collection, SHIFTING SHADOWS, which I’ve never read. It turns out that I’ve only ever read one of the stories in that collection, and hearing that the whole collection is good, I went ahead and picked it up. Then, since I recently read the latest Alpha and Omega novel and was in the mood, I paused with ICE CREAM STAR and read Briggs’ collection right then. 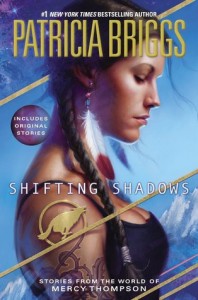 And I was glad to find that all the stories are indeed good, solid stories. I didn’t keep track of which were new to the collection and which had been previously published, because as I said, all but one were new to me anyway. My favorites were Kara’s story, “Roses in Winter,” and Ben’s story, “Redemption.” Oh, and David Christianson’s story, too — “The Star of David.”

Briggs mentions in her notes about the stories that readers have kept asking and asking about Kara. The Kara I mean here is the little girl who was turned into a werewolf when she was ten or so. (I specify because Briggs has used the name three times now for minor characters.) Well, I, too, have really wanted to know what was going on with Kara. So this story was very satisfying. Especially since I’ve always liked Asil anyway.

Ben is a secondary character who has always been interesting and sympathetic. I’ve loved watching his slow recovery from his horribly background. This was a fun story with a lot of humor but also some depth to it.

David Christiansen is the guy who was turned into a werewolf overseas and didn’t learn how to control his wolf until tragedy had already happened. I always wanted to see more of him, too, and I’m really pleased to see him reconnect with his estranged daughter in this story.

The character I would have liked to see but didn’t get in this collection was Honey. Honey is one of the most interesting female characters in Mercy Thompson’s world, maybe the most interesting; certainly by far the most sympathetic female werewolf. On the other hand, given what was going on in NIGHT BROKEN, the most recent Mercy Thompson novel, I am virtually certain that Honey is going to take on a more front-and-center role in the ongoing novels. So, fine. I can wait.

Okay. Now I’m going back to ICE CREAM STAR. I need to finish it before I can start revising HOUSE OF SHADOWS — and I would kind of like to have that done before the beginning of May.