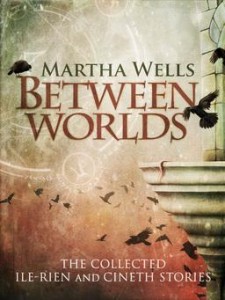 New Treasures: Between Worlds: The Collected Ile-Rien and Cineth Stories by Martha Wells

I saw this on Black Gate, in a post which says:

Martha Wells was one of the most popular writers ever published in Black Gate. In fact, her three Cineth stories featuring Giliead and Ilias helped bring us a host of new readers.

Those three stories have never been collected — until now. Between Worlds: The Collected Ile-Rien and Cineth Stories, one of six anthologies to be funded by the successful Six by Six Kickstarter in December, is now available. It contains “Holy Places,” “Houses of the Dead,” and “Reflections,” which first appeared in Black Gate 10, 11, and 12, as well as “Night at the Opera,” a brand new Nicholas and Reynard story set before The Death of the Necromancer, and two other stories.

Actually, I have most of Martha Wells’ short stories. On the other hand . . . a brand new Nicholas and Reynard story. Hmm.

I see that like me, Martha Wells chose to price her collection at $2.99. For that I will pick it up just to have the stories collected. And, of course, to get the Nicholas story.