My phone does not take great pictures, but on the other hand, I always have it with me. It does close-up photos pretty well. So here, a tour through some decent fraction of the Magnolia genus: 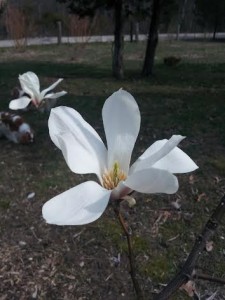 This is a Yulan magnolia, Magnolia denudata. Henry Mitchell, I think it was, declared that this was the most beautiful of all magnolias. Not that opinions aren’t going to differ, but since Henry Mitchell wrote just about the best every gardening essays, I thought, MUST HAVE, and got one. It has been BY FAR the slowest of my magnolias to start flowering. It is something like ten years old and this is its first year to really flower. It opened its buds ten days before the other early magnolias. Ordinarily we are told to look for later-flowering magnolias to reduce the risk of frost damage to the flowers. But this year, its early flowering means the Yulan magnolia was completely finished with flowering *before* we got three nights of 32 degrees. You never know about weather in this state. The transition zone goes right through my yard, honestly.

The Yulan is very drought tolerant, showing little signs of stress even in terrible years. Mine is in a spot with deep soil that stays moist for quite some time. Even so, I was surprised it set so many flowers after our pretty serious loooong drought last year. I did water it, a bit, but a tree this size — it is at least 20 feet tall, maybe 25 — basically has to cope more or less on its own. 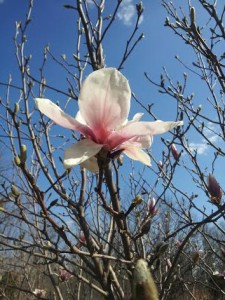 This is an ordinary saucer magnolia, the common hybrid Magnolia × soulangeana that we see everywhere. The cross that produced it was M. denudata x M. liliiflora, by the way. Common or not, it is a highly desirable tree, tending with age toward a more spreading growth pattern than the Yulan, which is very pyramidal. Of course, my saucer magnolia is just a baby. It got significantly nipped by those freezing nights, with all the flowers already open browning around the edges. This flower happened to open after the freeze, but overall, this tree’s display is not great this year.

Saucer magnolias ought to have plenty of fragrance. Mine is just barely perceptibly fragrant. Buying one in bloom so you can check the fragrance is probably a good idea. Magnolias are pretty tolerant of being transplanted, so even though I would ordinary say don’t transplant a tree when it’s in flower, I expect you could get away with it. This tree is also quite drought resistant, though I’m still watering this one carefully since it’s only three or four years since I planted it. 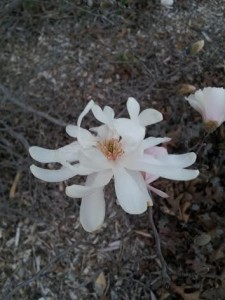 This is another relatively common magnolia, a star magnolia, M. stellata. These are mostly much smaller than Yulan magnolias or saucer magnolias, though I’ve seen fairly sizable old ones. Think of them as shrubs rather than trees, and remember they’ll grow slowly but put on a show young. Mine is at least ten years old and hardly taller than I am, but it’s very pretty.

Star magnolias are supposed to “bloom later” than saucer magnolias, and thus be safer from late freezes. Mine blooms at exactly the same time as the saucer, and so do the ones in town, so I think the “blooms later” thing applies to other areas of the country or is just wrong. Anyway, we can get late freezes till May, so it doesn’t make any difference when the trees bloom, all the spring-blooming magnolias are at some risk of being zapped every year. This doesn’t harm the trees, btw, only the floral display.

My star magnolia is slightly fragrant. They aren’t all.

This tree is “drough resistant” in the sense that, if pushed by a prolonged drought, it will suddenly drop 90% of its leaves — all but a fringe around the outside tips of the branches. This does save it a lot of water loss, but it is terribly unsightly and undoubtedly stressful. The tree gives very little warning when it’s about to go to that extreme, so I water mine pretty carefully, especially if our typical drought starts early in the summer. 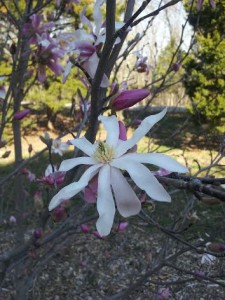 This is Magnolia ×loebneri, which is a hybrid between M. kobus and M. stellata. It’s my mother’s favorite. It’s very pretty and flowers with great reliability, but it definitely takes after M. stellata as to how it handles drought. That is, it handles it badly. I start watering this small magnolia before I think it can be too stressed and water it more than other plants, trying to keep it from dropping leaves. It will re-grow them if it gets enough water, but I’m not sure it could tolerate dropping and regrowing 90% of its leaves twice, which in a bad year it will try to do. So I attempt to keep it watered. 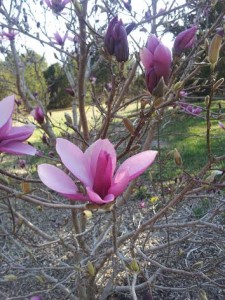 This is Magnolia ‘Ann,’ a M. liliiflora and M. stellata cross. It is my favorite by a mile. It’s a very big shrub or small rounded tree. I love it because of the beautiful color of its flowers, because even though it opens at almost exactly the same time as the saucer magnolia it is far more frost-tolerant, and because it is very, very drought resistant. I almost do not water ‘Ann’ during droughts and it keeps its heavy, thick foliage right down to the ground. Birds nest in it; you find their nests in the winter when the leaves drop. It’s a good choice. Any nest in this magnolia is going to stay completely hidden all summer.

I’ve successfully made cuttings from this tree twice. One is about five years, about shoulder height, and has been flowering for a couple years. I put it right next to a cedar. It would be far, far too dry there for most plants, bt I’m guessing ‘Ann’ can handle it. The other, which is two years old this spring, is about as tall as my hand is long. I will let it grow in the nursery bed another year before I move it.

I also have a Magnolia ‘Jane,’ which looks a lot like ‘Ann’ so far but it is just a baby, so I can’t yet compare them very well. I planted it a year ago and it is about waist high. It is opening its flowers now, a bit behind ‘Ann,’ but very young plants often flower a bit later than established plants.

My other spring-flowering magnolia is Magnolia ‘Butterfly,’ a M. acuminate and M. denudate hybrid with flowers that are more yellow than the older “yellows,” which were more cream-colored. It is a young plant. It flowered okay the year after I planted it, but this year it has exactly 1 flower, which started cracking open today. I don’t know whether this is lingering transplant issues (unlikely, it seems to me, for a magnolia), or the extended drought last summer. I know I must have watered it, but it’s so young, maybe not enough. I hope there’s nothing actually wrong with it.

I also have two summer-flowering magnolias. One is a big Southern magnolia (Magnolia grandiflora) which gradually opens one big white flower after another during midsummer. It is my fastest-growing magnolia, about 25 or 30 feet now. Mine is a cultivar that’s a bit more hardy than the species, and a good thing, given the bitter winter year before last. Some of my zone 5-6 trees suffered badly from that zone 4 winter.

The other is my special pet, an Oyama magnolia, Magnolia sieboldii. It is a small shrubby type so far, very slow growing, but unusual and beautiful in flower and seeming at least pretty drought resistant. I water it, though, so I’m not sure how drought resistant it really is. A form of Oyama magnolia that I don’t have is Magnolia sieboldii ‘Colossus’, a hexaploid variant that is supposed to be bigger and showier in every dimension, more heat tolerant, and far faster growing.

All magnolias are deer and bunny resistant, btw, a huge plus for me.

If you’re in MO, this is the time to visit an arboretum, admire the magnolias, and decide which of the spring-bloomers are your favorites. If you’re not, then hopefully you have a yard and live in a zone where you can plant at least one. There isn’t another tree genus in the world that’s more glamorous.

Excuse me, I’ve got to go take the dogs out and admire the magnolias.