Here is Honey, primping before driving to the show: 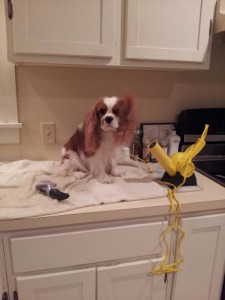 She is sitting on the kitchen counter with a blow dryer pointed at her ears. As you can probably tell. Generally one bathes the dog the day before the show and tries to do the ears again the morning of the show. Honey doesn’t have a ton of coat, so she’s easy to keep in good condition, but on the other hand I want her ears as fluffy as possible when we walk into the show ring because she doesn’t have a ton of ear fringe compared to some.

Anyway, here is Honey back home after the show: 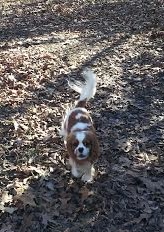 She doesn’t know she is a new champion, but she certainly has noticed that she’s getting double treats today!

She is now what is called a “well-balanced dog” — meaning a title at both ends. It’s a joke, especially appreciated by people who show in performance. But her full official name as soon as this one point goes through will be: AKC Champion Anara Honeysuckle Rose RN RA

This was actually an interesting show. Generally I try not to say snide things about professional handlers and the way they win all the time, because of course often the professional handlers are showing very good dogs, and generally they know how to groom them just right, so naturally they do a good bit of winning. But it does get frustrating, because from time to time it sure looks like a particular judge is awarding the win to the handler without looking at the dog — I’ve seen the occasional not-very-nice dogs go up for major wins from time to time. Losing to a dog that is plainly excellent is not as bad as losing to one that is obviously not nearly as good as yours.

But today — well, the situation was this: the entry was bigger, but the animals that actually showed up were four boys and one girl (Honey). In Missouri at the moment that’s one point for the dogs and, of course, no points for the bitches. But even when there aren’t any other girls, it’s possible for a girl to get a point by winning the boy’s point. She does this by first automatically getting Winners Bitch (because she’s the only bitch there). Then she goes back in the ring to compete with the Winners Dog for Best of Winners. If she beats him, she gets as many points as he won.

Now, Honey is a pretty little thing, but she doesn’t have the glamour of a top winner, she has that kiss mark on her face, and she has a white sclera in one eye. So I didn’t think she had a chance of beating the Winner’s Dog, who was unquestionably a nice youngster. But the professional handler — with whom I’d been chatting — did SUCH a casual job of showing his boy! He let him sit, he let him amble around the ring, he didn’t encourage him to pose, he didn’t really move him out on the down-and-back — in other words, he was trying to give Best of Winners to Honey. Sometimes this kind of thing affects the outcome and sometimes it doesn’t, because the judge has already seen both animals showing properly and very likely she has already made up her mind. But in this case — whether because of Honey’s extremely good movement, which she showed off fairly well today, or because of the dog’s casual look in the Best of Winners competition — the judge gave the win to Honey. Poof! She’s a champion.

None of this did anything for or against the boy puppy, btw. He’d already won his point and the male special had already gotten Best of Breed over both of us.

If I were a judge, I would absolutely award the better dog no matter what. And maybe she’d have given it to Honey anyway. Quite a few judges have appreciated Honey, especially if they came out of Sporting Dogs and prioritize movement and even more so if they don’t approve of the modern shift toward more extreme heads in the breed. But I sure appreciated that handler, whose name I don’t even know, giving Honey a little boost. At the very least, it shows good will. So, whoever you were, bless you, friend.

I’m done showing for the year, now. Except I’ll put Ishmael in nearby shows to boost the numbers in dogs (and thus the points) when my friends need me to — Deb is trying to get majors for her boy. And I would like to put one or a couple Rally titles on Ish, of course. But that is much, much less stressful. I just do that because we all enjoy it, and although it’s nice to win first place, it doesn’t *matter* — all you need are qualifying scores, so you generally come home with a new title after every weekend.

Zero progress on the WIP today, but, yeah. Today was a good day.

Addendum: I looked up the judge in my show notes, and she is definitely a structure & movement judge. In 2011, she gave my young girl of mine, Eve, Best of Breed over a really nice male champion, and when I commented that she must not have minded the puppy’s freckles, she said, “Oh, I don’t mind freckles when she moves like that.” I made a specific note about that at the time. Eve was possibly my best-structured puppy ever, though rather too big and certainly not feminine and pretty. I do regret placing her as a pet now that I’m down to two intact girls, but at the time, placing her made sense.

8 thoughts on “Sometimes you win: The kindness of strangers edition”