I don’t mean that there are only five distinct plots! I know people occasionally make that sort of assertion and that is not what I have in mind.

But it has occurred to me that there are definitely just five kinds of books that matter in my life, and in fact I bet you all have precisely these same categories.

1) Books I will definitely, without question, read this year.

2) Books I would really like to read this year.

3) Books I definitely intend to read sometime this decade, if possible.

4) Books I would kind of like to read before I die.

5) Books I definitely do not intend to read.

The first category is easy! Category (1) books are simple to identify. It exclusively includes books which come out this year that are part of a series I am really enjoy and that I very familiar with so that I don’t have to re-read the earlier books. This includes Patricia Briggs’ DEAD HEAT. Also Marie Brennan’s VOYAGE OF THE BASILISK. Also CJ Cherryh’s TRACKER. Also most likely ANCILLARY MERCY by Leckie and AN APPRENTICE TO ELVES, by Elizabeth Bear and Sarah Monette, both due out this fall. These are titles I will read, not necessarily the minute they hit the shelves, but probably within a month or two of publication. Laura Florand is a special case of this category, because it is easier for me to read a contemporary book when I’m actually working on a fantasy novel of my own whether it’s part of a series or not. They are easy to get into and out of, and her books are quick to read, so her books are also in Category (1).

Category (2) is bigger. It includes new standalone titles by authors I love, OR titles that are part of a series I love but where I want to re-read the earlier books before reading the new one, OR books by new-to-me authors that come with a strong recommendation from someone I trust, such as many of you.

This year, books in this category solely because of a recommendation include THE STORY OF OWEN by EK Johnson, THE STEERSWOMAN by Kirstein because both Kate Elliot and my brother strongly recommend it, and THE GIRLS AT THE KINGFISHER CLUB by Genevieve Valentine.

Books that are part of a series, but where I want to re-read the whole series plus the new one, can be hard to get to because I have multiple writing deadlines of my own and reading a trilogy is more of a commitment than reading a single book. But I will try hard to read JINX’S FIRE by Sage Blackwood this year.

New standalones by authors I love includes things like Sarah Addison Allen’s FIRST FROST, which is out now, I believe. Ah, yes, I see it came out in January. Well, I was busy in January and I’m busy now and I’m not sure when I will get to it.

Catagory (3) is much, much bigger. It includes everything from Category (2) that I don’t actually get to this year, plus things that one or more of you recommended but that I have some doubts about — here I’m thinking of 100 YEARS OF SOLITUDE, which I just picked up because Sherwood Smith pushed me toward it. Plus everything on my current physical TBR pile, because it’s just embarrassing to have the same books sitting there year after year. I’ve got Cinda Williams Chima’s THE DEMON KING on there. Do you realize that came out in 2010? It’s terrible. Also I haven’t ever read the third book of Rachel Carson’s THE GIRL OF FIRE AND THORNS (I need to re-read the whole trilogy).

Also included in Category 3 are any series where I’m specifically waiting for the author to write the last book before I read the series. That’s like THE RAVEN BOYS quadrilogy, for example. The 4th book, THE RAVEN KING, is due out this fall. That’s all very well and I may actually read the whole set when it comes out, but who knows? A four-book set is going to involve a heavy commitment of time. Maybe next year. Or the year after that.

Category (4) includes WAR AND PEACE. And stuff like that. You can probably fill in the titles. Probably some of them are on your list, too. A TALE OF TWO CITIES. Things that are basically hovering on the edge of my radar. I know they’re there, I have heard good things about them, I would like to have read them, but they keep being bumped out of the way by new releases I’m dying to read.

And, of course, you can all fill in books from Category (5) after those recent discussions about Grim Classics. THE CATCHER IN THE RYE: yeah, no, thanks. I’m glad I wasn’t forced to read it when I was in high school, and I sure don’t plan to read it now.

So. The current Top Ten Books I Most Want to Read Right Away . . . titles come and go from that set. But at the moment, books I’m most likely to pick up in April include, not necessarily in this order:

The Girls at the Kingfisher Club by Genevieve Valentine

The Steerswomanm by Rosemary Kirstein

I Rode A Horse of Milk-White Jade by Diane Wilson, which I feel a tug toward every time I see it on my coffee table

Kill All the Lawyers, the sequel to Infinity Hold by Barry B Longyear, which I only just found out about.

Keep the Law, which is the third book in that series

A Wind in Cairo by Judith Tarr

The Voyage of the Basilisk by Marie Brennan 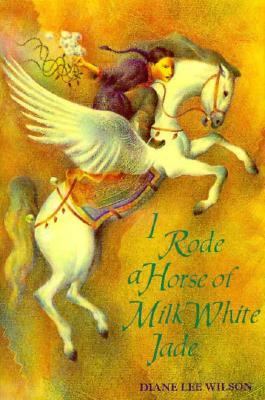