I was seeing various lists of favorite female protagonists here and there recently, and I thought, How could you even begin to narrow this down?

Then I thought, well, how about female SFF protagonists who a) are competent, b) from the first moment they step on stage. This eliminates virtually all modern YA heroines in one fell swoop. Poof! Because the only acceptable character arc for a YA protagonist involves gaining competence or confidence or both as the story unrolls.

Feel free to mention exceptions if you can think of any.

But sometimes it IS the case. Here is my Top Five Competent Female SFF Protagonists, in the order they came to mind. Wait, Top Six, I just thought of another one.

1. Tremaine Valiarde from The Fall of Ile-Rien trilogy by Martha Wells. I think Tremaine is the youngest protagonist on my list, but she is a highly competent person right from the beginning. I particularly love her ruthless streak. She is one of my favorite protagonists ever.

2. Maskelle from THE WHEEL OF THE INFINITE by, yes, Martha Wells. What can I say? There’s a reason Martha Wells is one of my favorite authors. Maskelle is at the height of her power when the story opens. This gives every single situation a great slant. The challenges Maskelle face have nothing to do with the sorts of problems a younger, more uncertain, less powerful woman would face. I love Maskelle.

3. Honor Harrington from David Weber’s well-known series. This is by no means my favorite-ever series. On the other hand, I do find myself going back to it every couple of years.

4. Heris Serrano from HUNTING PARTY by Elizabeth Moon. Another ship captain, another excellent, competent, decisive, mature female protagonist. This is one series where I think the early books are better than the later ones, btw. HUNTING PARTY does stand on its own very well.

5. Torin Kerr from the Valor series by Tanya Huff. Huff is writing at her best in this series, and she made an excellent choice when she made her protagonist a master sergeant rather than a commander. That gives her series a different slant from virtually all other military SF and space opera out there. I sure hope she goes on with the series, because I don’t think it really reached a stopping point after the five books that are out so far. 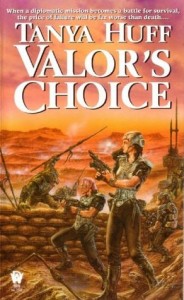 6. Morgaine from Morgaine’s Saga by CJ Cherryh. Because, hello. Morgaine just about is The Type for a female protagonist at the height of her power.

Okay, who am I missing? I would definitely appreciate pointers to other great books featuring mature, highly competent female protagonists.