Satire, as this site declares, “Satire is the form of humor that holds people, or society in general, up for examination, and ridicules the follies revealed.”

I think this is a good thumbnail definition.

The post — by LORDZB at Listverse — then goes on to list the ten greatest satirists of all time: Aristophanes, Plato, Juvenal, Chaucer, Erasmus, Jonathan Swift, Voltaire, Ambrose Bierce, George Orwell, and . . . I can’t comment on this, never having watched the show . . . Matt Stone and Trey Parker, who write “South Park.” 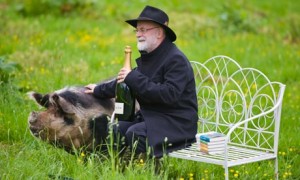 Terry Pratchett’s first books were light fantasy, and I didn’t care for them. But somewhere around MORT, he found his true niche as a writer of satire, and after that he only got better — more incisive and biting, more insightful and laugh-out-loud funny. I’m not sure there’s ever been a satirist to top Pratchett, but I’m sure I can’t take any list of satirists seriously if it leaves him off.

I’m sorry he died so young, but grateful he had time to write upwards of forty books.

My favorites, hands down, were the later Sam Vimes titles. I don’t think GUARDS! GUARDS! was his best — but I think many of his best are in this set, especially NIGHT WATCH.

I love GOING POSTAL and MAKING MONEY; I love the Tiffany series; I love REAPER MAN.

I’m glad I still have quite a few of Terry Pratchett’s titles that I haven’t read, and sorry that from now on when I read one of his books, I’ll know there won’t be any more.