Someone asked Janet Reid a question about cultural appropriation recently. I’m reproducing the question and Janet’s answer in full here:

My current WIP features a young Alaska Native man, and while he’s not the MC, he has a very prominent supporting role (he is actually one of my favorite characters), and there are several other minor characters who are also Alaska Native. Since the book takes place in Alaska, this is appropriate, I believe. I am not an Alaska Native, but I have lived in Alaska for 26 years and I have many very dear friends who are. So while I don’t have personal experience being IN this culture, I hope that my associations with it (and extensive research) will create a voice that rings respectful and true. I also have zero experience being a man, but while that’s a whole different can of worms (no pun intended), for some reason don’t see that as big of an issue.

My question is this: I am hearing a lot of call for diversity in novels, which is awesome, but I am also hearing criticism about writers appropriating a culture for their own means. Obviously, writers must write outside their own reality (otherwise, what’s the point?), but when does writing about a race or culture outside your own become appropriation? We’ve discussed this a bit in our writing group, but I’d really love to hear your perspective on this. Thanks!

This is a tough but interesting question. It’s very much akin to getting things “right” when simply by being a visitor to the culture, you can’t know what’s “right” down to the last detail. You will always see the culture through the prism of outsider.

That does not mean however that you can’t write fully developed and interesting characters from that culture. The key is like that of all good writing: make it feel authentic, but not just to you, to the people from that culture.

Appropriation is a loaded word for writers, whose job it is to steal everything they can and write about it. When does it cross the line? Everyone is going to have a different view on this, but the thing to pay attention to are people in that culture.

I didn’t understand that The Help wasn’t a fun book until I read the comments about it written by Roxanne Gay. While it’s not about appropriating culture, it does seem to say that stories are given a wider audience only when those in power agree to tell them.

I’m not sure there’s a real answer to your question. I think by asking it, by being aware of the problem, you’re on your way to steering clear of it.

This caught my eye because it so clearly gets at a current double bind that faces many writers today: We may want to write diverse characters and place them in non-American, non-European settings, but those of us who are white American (or English, or various other) writers are also likely to be perceived as practicing cultural appropriation if we do.

In fact, if we set a book in a culture clearly derived from a contemporary non-American culture, I believe there is a 100% certainty that some readers will have that perception.

For example, take THE SUMMER PRINCE by Alaya Dawn Johnson: 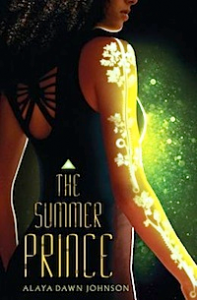 Beautiful cover, isn’t it? That’s what first caught my eye.

Here’s a snippet from the back cover:

heart-stopping story of love, death, technology, and art set amid the tropics of a futuristic Brazil.

The lush city of Palmares Três shimmers with tech and tradition, with screaming gossip casters and practiced politicians. In the midst of this vibrant metropolis, June Costa creates art that’s sure to make her legendary. But her dreams of fame become something more when she meets Enki, the bold new Summer King. The whole city falls in love with him (including June’s best friend, Gil). But June sees more to Enki than amber eyes and a lethal samba. She sees a fellow artist.

Now, here is a post by Johnson about writing this book, over at Scalzi’s blog Whatever.

Alaya Dawn Johnson: I tend to write my novels the way other people quilt, in a somewhat-ordered patchwork of varied materials that have arrested my interest. Which means that whenever I discuss my inspiration for The Summer Prince I end up babbling about matriarchies and fame and what a non-heteronormative society might look like when projected into the future of African diaspora culture in Brazil, plus music and art and human sacrifice (I thought about including reincarnation, but that seemed like overkill).

This is an SF story that is, I gather, on the boundary between YA and adult. Johnson makes it clear that she sent this manuscript to Brazilian readers for comments as part of her attempt to get details right, even though the culture she creates in this book is very different from contemporary Brazilian culture.

It’s easy to see why The Summer Prince has received a significant amount of acclaim. This is a tight, compelling book with an awful lot of things to say about art, about politics, about principles and compromises, about the prices people have to pay to make a difference, and about power and inequality. At less than 300 pages long, it’s a very compact story: it’s also incredibly effective.

Palmares Três is a city in what was once Brazil. A city with very little traffic with outsiders since the series of catastrophes that changed the world, but a city built on tradition as much as technology; a city ruled by the Aunties, and by a Queen who is chosen at regular intervals by the Summer King at the moment of his death. . . . It’s a powerful, deeply affecting book. It doesn’t pull its punches. Fluently written and elegantly put together, it’s an absolute joy to read.

You all know I greatly respect Liz Bourke’s opinion, right? I already have this book on my wishlist / TBR pile / a sample on my kindle — I don’t remember, but one way or another I have this book marked so I won’t forget about it.

But [this is] a Brazil that only an outsider could write. Because the story focuses on the parts of history and culture that an outsider would highlight, and none of the insider knowledge that goes much beyond the surface. And I want to be careful here because it’s not like I don’t appreciate and admire authors who want to move the focus from Europe/US to elsewhere in the world. I also have read interviews with the author (and even briefly met her at BEA a couple of years ago) and I believe in her good intentions and that she tried to be as respectful as possible, which just goes to show that even the best intentions can go awry.

Ana is half-Brazilian, half-Portuguese, btw, from Rio de Janeiro, and has studied Brazilian history. So there’s that. The comment thread at The Book Smuggler’s post is interesting, too, as for example a commenter (Sheila Ruth) suggests that perhaps the reason Johnson has her characters address their parents with terms equivalent to “mommy” and “daddy” is not because she thinks those terms are used by real Brazilians today but because she knows they aren’t, but is showing the infantilization of adults in that futuristic culture. It’s quite true that if you are deriving a futuristic culture from a current day culture, it is going to change.

I don’t know. This doesn’t come up when you set a fantasy novel in a purely secondary world. But the more closely you base your setting on a recent historical setting or an actual contemporary culture that isn’t yours, the more likely you are to a) make mistakes; b) use details that seriously turn off readers more familiar with that setting than you are; c) be perceived as guilty of cultural appropriation.

I know that there are mistakes in the Spanish in BLACK DOG, even though I had a friend who speaks contemporary Mexican Spanish check the manuscript. This happened because when I was correcting the Spanish from Online Translator PseudoSpanish to real Mexican Spanish, I missed some lines of Spanish. Since I don’t speak any Spanish at all, I couldn’t tell those mistakes were still in there. Nor could the proofreader, obviously. Well, now I know: have Spanish-speakers check your manuscript twice. Or three times. So that shouldn’t happen again. But this problem was a serious turn-off for some readers, as you can imagine, as well as highly embarrassing for me.

But this whole topic worries me a bit, because I have a partial manuscript right here (rattles bytes illustratively) for a story set in an alternate world that draws very heavily on the Ottoman Empire. And another idea for a secondary-world fantasy that is set in a culture strongly flavored by real SE Asian cultures. My inclination for both is to step a bit farther away from historical markers of either real setting, and then a bit farther away — make the settings more and more secondary, in other words — in order to avoid potentially offending readers more familiar with real historical settings than I am. But if authors avoid historical or non-American/European contemporary settings, fewer books set in those cultures will appear in modern fantasy literature. Is that what we want? That’s not what we say we want.

Speaking as a writer, I perceive this as a real dilemma, with horns and everything.

7 thoughts on “When is it diversity and when is it cultural appropriation?”