Over at Muddy Colors — link from tor.com — a long post featuring a lot of comics and game characters in redesigned costumes.

I like this post, and I love a lot of the redesigned costumes, though I must say, not all of them. Personally, I’ll go for a sleek costume, a practical costume, or a costume with gravitas, any of the three, over a clunky or too-casual look. Samus (Metroid), for example: too clunky. The Scarlet Witch: way too casual. Mind you, I’m not the least bit familiar with either character, so for all I know, these redesigned costumes totally fit the characters. I just don’t care for them.

A costume with gravitas: Phoenix from The X-Men

A character whose expression and attitude were never, ever suited to the bikini look: Niriko from Heavenly Sword. Seriously, it’s hard to see how the original artist could give her that attitude AND put her in a bikini at the same time. The screen should have exploded.

I will add, if it’d been me, I’d have invited male artists to contribute. I get that this is about costumes-by-women-for-women, but still. I can’t imagine that every male artist ever thinks those spandex-thong-bikini costumes are the best thing ever.

I don’t think it’s actually true that those bikini costumes are designed for “the male gaze.” I think they’re designed specifically for what marketing departments think is going to appeal to the teenage male gaze. You do see a lot of art like this at SFF conventions, and it makes me roll my eyes SO HARD. But I expect a lot of men also roll their eyes, if only because the spandex-bikini thing is so horrifically impractical. Perhaps a second post for costumes redesigned by male artists who are not being pushed toward bikinis by marketing departments?

Incidentally, it’s pretty obvious that in publishing, marketing departments don’t just pander to the male gaze. Is there a single modern romance cover where the guy has his shirt on?* And there are plenty of horrible Barbarian Warrior covers, too. This — 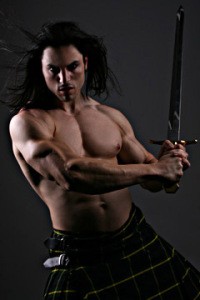 — is just as ridiculous for a guy with a sword as a bikini is for a woman with a sword. My God, people, don’t you know how unpleasant belly wounds are?

Also, either the pushback from female (and male) readers or something seems to be having an effect on marketing decisions for SFF novels, if perhaps not yet for comics or games, because check out this cover for Laura Anne Gilman’s forthcoming SILVER ON THE ROAD: 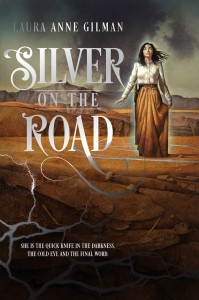 That is a nice cover. It’s by John Jude Palencar. I know that novels are not the same as comics, but I wonder how Palencar would have redesigned Red Sonja? The cover copy strongly implies that this fantasy novel includes a romance. Now the Territory’s Left Hand, Isobel takes to the road, accompanied by the laconic rider Gabriel, who will teach her about the Territory, its people and its laws. Yeah, “laconic” is clearly a code word for “romantic male lead.” Yet Palencar did NOTHING to sexy up this cover. I like landscape-heavy covers and don’t care for sexy covers, so this is a book I would pick up off the shelf if I happened to be browsing.

Covers are meant to sell books. Or comics, or games. I get that it would probably be less efficient for marketing people to scramble their signals so that it is harder to know at a glance whether a book is paranormal romance or historical fantasy, though in fact I find it remarkable that readers browsing the shelves (or browsing online) ever notice any new UF release if the cover blends into the horde of sexy-woman-with-sword-and-animal covers. Romance covers are even worse, since they all feature the same shirtless-dude-with-languishing-woman.*

I get that marketing people are not going to put the same cover on a product expected to draw primarily teenage male readers, or on a book aimed mainly at women, as they do for a historical fantasy meant to appeal to a broader audience. I get that women are (often) going to roll their eyes at the bikinis, that men are going to (often) be turned off by the shirtless wonders* on romance covers, and that marketing departments won’t care about either reaction if in general their product will sell significantly better with standard types of covers on them.

But I expect that anything marketing can do to make their titles stand out of the herd can only help visibility, even if it means giving up some of the signaling value of the standard cover tropes. At least, I wish they would try. At least to the extent of stopping with those asinine bikinis.

If you have time to click through and check out the costume redesigns, I hope you will comment. Especially if you’re a guy.

*I know perfectly well that some romance covers feature men with their shirts on. Please don’t take the time to point that out.