How very handy that I just read The Tropic of Serpents! Because look here: 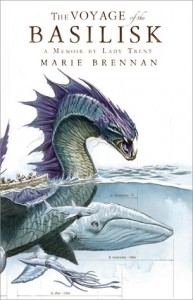 Tor.com lists this for a March release.

Okay, cool stuff here: See that title? From the title ALONE I would know that this is going to be a riff on Darwin’s voyage on the HMS Beagle. But I also knew that because of how Lady Trent refers to the next installment in the second volume of her memoir.

I have a copy of the Voyage of the Beagle downstairs, along with the Origin of Species and all my other stuff by Darwin and other important figures in early evolutionary thought. I’m definitely going to bring The Voyage of the Beagle upstairs and review it before reading The Voyage of the Basilisk. One of the things I admire most about this series is how Brennan captures the flavor of the early naturalists’ explorations and writing. I want to be able to really appreciate how she plays with real history in this third book of her series.

Once again Tor’s put out a great cover. Look, do you see that we have four quite distinct taxonomic groups represented? The cover artist wasn’t going just for “Big Famous Marine Animals”. This is a cephalopod mollusk, a chondrichthyes “fish” — sharks are only “fish” by tradition, really — a mammal, and a sea serpent. Very, very nice choices if you want to cover a huge evolutionary spectrum and still pick animals anybody would recognize. That is so cool.

Hardly any of the other March releases catch my eye — if you happen to click through, is there any author or series there you’re particularly looking forward to? — but there is one other title I noticed:

Shadow Scale, Hartman’s sequel to Seraphina, is also coming out in March. 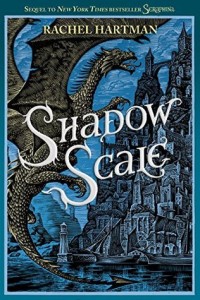 I read the first book just last year, so I’m in a good position to read the sequel now without having to review.

Also! Estara reminds me, AKH’s newest title, Pyramids of London, is coming out just at the tag end of February, so we’ll count this as a March release: 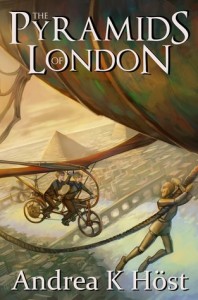 4 thoughts on “Oh, check out this coming release!”