So, I’m about halfway through STELES OF THE SKY. 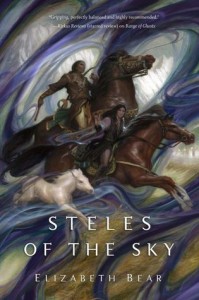 The best part of this series: The details in the worldbuilding! Elizabeth Bear did an incredible job with this. Like, Temur’s people are based on Tibetan steppe nomads, and the horses are clearly Akhal-Tekes, with not only the metallic sheen to the coat, but the sparse mane and flat musculature; and the dogs are just as obviously Tibetan mastiffs, with the correct matted coat for working mastiffs. I know I’ve mentioned this part of the worldbuilding before. But also:

a) I’ve seen lots of mages control fire in fantasy novels, but I’ve never seen any author correctly refer to combustion as a dehydration reaction that produces water. Wow. I mean, Bear didn’t actually lay out the chemical equations, but she came close.

c) When the cream-colored foal is born, Temur explains correctly that it’s impossible to get that color of foal out of a bay mare. This is true because that color is almost certainly produced by the chinchilla dilute and you would need it to be homozygous, but the bay mother can’t have that allele or she wouldn’t be bay (she would be buckskin). Temur explains exactly what crosses could produce “ghost” — by which he means what we could call cream. Correct color genetics in a fantasy novel! It’s amazing.

What ought to be the best part of this series, though: the characters. And here we stumble into a problem that I never realized existed, or even could exist. The secondary characters are TOO well developed. Let me lay out what’s happening to me as a reader while I work my way through this series:

1. Yangchen, now Dowanger Empress Yangchen, accidentally let a really horrible plague of demons invade her country because of her machinations to remove her mother-in-law, a crime for which she framed her junior husband even though it meant he would be burned alive. All this is terrible. She did terrible things, and the results are even worse than I’ve indicated. Now she is horrified by what has happened and she is also coming to believe that she was probably wrong to murder her mother-in-law in the first place, even if that hadn’t led to the rest of this. She is trying harder and harder to be a good empress. She is actually intrinsically kind — amazing, given her early history in this series, but it’s true. I’m really pulling for her to somehow overcome the dire obstacles she and her people face, grow into herself, become a great Empress, and hopefully rear her son to be a way, way better Emperor than his father. YANGCHEN SHOULD BE THE MAIN CHARACTER. I would totally read a book that focused just on her. It is jarring to switch out of her pov.

2. Ummuhan, a female slave-poet in the Caliphate of Uthman, has a tough row to hoe. As a woman, she has to pull strings from the background, and exactly what she’s trying to achieve is not perfectly clear. Her actions, too, have led to horrible things — she’s riding a tiger, and she’s not in control of it, and it’s hard to say how things are going to work out for her or for the Caliphate now that she’s helped a pretty evil guy usurp power. Oh, btw, Ummuhan is also a secret priestess. Women, horribly restricted in the Caliphate, do not get to be priestesses, which is why this is secret. Exactly what the secret order of priestesses entails is not clear, because we just do not get enough time with Ummahan to find this out. UMMAHAN SHOULD BE THE MAIN CHARACTER. I would totally read a book that focused just on her. It is jarring to switch out of her pov.

3. Tsering is a wizard who never gained power. She knows everything about the theory of magic, but she has no magic of her own. She fights against envy in order to be as useful as possible to her order of wizards and to her people. She has a tragic backstory, about which we know practically nothing; and a very promising character arc. TSERING SHOULD BE THE MAIN CHARACTER. I would totally read a book that focused just on her. It is jarring to switch out of her pov.

4. Hsiung is a mendicant monk who years ago snuck a look at one or some forbidden texts. The texts, from the ruined city of Erem, blister your mouth when you read them out loud. Just reading them makes you go blind. The magic in them contaminates you permanently in various ways. So Hsiung has been dealing with all that. In order to protect his order of monks and also in order to avoid punishment for reading the forbidden books, he left the monastery. In order to protect everyone from the magic that contaminates him, he took a vow of silence. Now, in the middle of the third book, he has finally returned to the monastery to lay out the story of what’s been happening to his masters and seek their help, no matter what it costs him personally. Hsiung’s story has hit several of my favorite tropes and wham! He is now one of my favorite characters in the story; his story is one of the most compelling, if not *the* most compelling. HSIUNG SHOULD BE THE MAIN CHARACTER. I would *totally* read a book that focused just on him. I really resented switching out of his pov.

Every single character could fall into this category of should-be-the-main-character. I’m not personally too keen on Hrahima, the tiger woman, because for me she is a bit much-of-a-muchness. Hrahima, the super-tiger! But the glimpses of her backstory that we get are interesting and I’m sure she appeals to many readers. Also, I flinch from Edene’s pov, not because she isn’t sympathetic, but because she’s being used by the bad guy, she doesn’t know it, and I feel terrible for her. I hope she turns in al-Sepher’s hand at the end and saves the day. But to me, it looks like her story is inevitably going to end in tragedy.

Anyway, rounding out all the “secondary” characters to this extent is definitely contributing to the difficulty in focusing on what started out as the “main” storyline, that of Temur and Samarkar. My response as a reader is to become more emotionally distant from all the storylines in order to avoid being jarred as much.

My response as a writer, btw, is to consider picking up one or more of the secondary characters, revamping all the details while keeping intact some part of the central heart of the character and his or her basic dilemma, and writing a book where that character gets to be central. If you someday read a book of mine in which the main character’s story involves stealing forbidden knowledge and eventually returning to his home to make amends and seek help in saving the world, well, you’ll know where that came from.