So, I’m reading THE SHATTERED PILLARS. 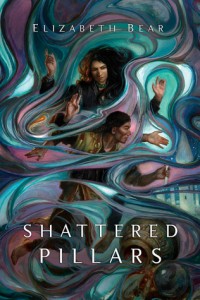 I like it very much. I do. But I don’t love it. And this is why: Shifting point-of-view.

In the first book, which I *loved*, we had two main pov characters: Temur, a prince of the steppes, and Sarmarkar, a wizard of Tsarepheth. We also had two or three minor pov characters, including the bad guy, al-Sepehr, who is indeed pretty Bad; and Edene, Temur’s woman, who was kidnapped by al-Sepehr.

In the second book, we spend A LOT less time with Temur and Sarmarkar because we also get more extensive point-of-view sections not only from al-Sepehr and Edene, but also from al-Sepehr’s servant(s), the twins, who at this point cohabit in Saadet’s body; Empress Yangchen, who has accidentally allowed her own country to be invaded by horrible demon things and is being eaten up by guilt because of that, and no wonder; Hong-la, a wizard who is trying to save people from the horrible demon things; Tsering, who ditto; and Hrahima, who is a woman from a species of tiger people.

This is too many for me. I could care about any of those characters, because they are all interesting, but since I never get to spend more than a few pages with any of them, it’s hard to get emotionally engaged with them. Saadet is an interesting person and she’s in an interesting position; she could easily carry her own story; but she only gets a handful of pages here and there, and in context, her interesting story simply pulls attention away from Temur and Sarmarkar. It’s too few pages for *her* story, but too many pages of her story to let the main pov characters carry me along with *their* journey. The same goes for every single one of the minor characters.

So. I’m still interested in how all this works out, and I’m fine with going on, but. A lot less emotional engagement.

I think I am intrinsically less into epic fantasy, with these cluttered pov casts, and far more into adventure fantasy that focuses more on one or two protagonists and does not insist on presenting the reader with the points of view of every character in the whole entire world.

If there is going to be a cluttered pov cast, then I would prefer to spend PLENTY OF TIME with each character before switching to another. That is the basic difference between Sherwood Smith’s INDA series, for example, and this one. I can think of other examples easily, so this is definitely a thing for me. Miller and Lee’s Carpe Diem, two thumbs up; but their Fledgling, two thumbs down; and primarily for the same exact reason.

Any of you already read the whole Range of Ghosts, Shattered Pillars, Steles of the Sky series? Did you have the same issue as the pov became more diffuse, or was that fine with you? I wonder if this is a difference between readers who are more focused on character vs more focused on plot.