From Chuck Wendig, this: 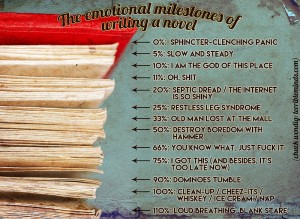 But here’s what’s interesting to me:

1. My milestones are completely different, and

2. I don’t even come within stone’s throw of the same milestones for each book.

I suppose the first point is to be expected, because everyone’s writing experience is different. Chuck takes the beginning slow-and-steady, really? That’s the smoothest, easiest part, and often one of the fastest. And so forth.

A few years ago I would have said: Sure, milestones: smooth beginning, tough slog through the early middle, easier through the late middle, downhill slide to the end, ice cream and cookies to finish.

Now, with another half-dozen books under my belt, I have to say, well, sometimes. Other times, unfortunately, it’s a tough slog through the early middle, the late middle, and all the way to the end, and only the awareness that the book is under contract WITH A DUE DATE keeps me going. Well, that, and glimmers of satisfaction scattered here and there through the manuscript.

In contrast, every now and then the whole thing is like a downhill slide and you couldn’t pay me enough to make me stop, whether there’s a deadline or not. (This doesn’t happen as often as I’d like. Twice? Oh, two and a half times, really.)

The whole thing is also complicated because in retrospect every book seems like it was easy to write. They start feeling like they were really no trouble as soon as they’re done, no matter how tough they were to get through. I can hardly believe now how doubtful I was that The Griffin Mage II (SANDS) was working, at the time I was working on it. But if I think about it, I can remember how uneasy I was about big sections of it. (I always loved Lady Tehre, though.) I remember how relieved that my agent gave it a thumb’s up, because I wasn’t sure she would. Now it’s (usually) my favorite of the trilogy.

Anyway, I wonder whether in ten years Chuck will still be saying: And in this magical journey where I headbutt my monitor again and again until the bloodstreaks form words and become novels, I notice that I hit the same emotional milestones during every book, in roughly the same order, at roughly the same points-of-completion. Or whether by then he will have hit a couple of books that just did not fit the pattern.

4 thoughts on “Emotional Milestones of Writing a Book”