There’s a particularly interesting book in the latest SFBC mailing: 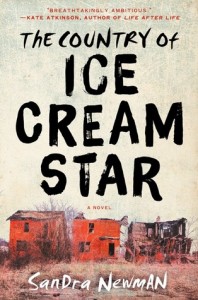 Okay, first observation: That is an intriguing title. For a change, it is not a cop-out to use the main character’s name as a title, because “Ice Cream Star” as a name? Wow. Frankly, I would have used just that and not added “The Country of”.

Here is what the SFBC says about this title:

In the ruins of a future America, fifteen-year-old Ice Cream Star and her nomadic tribe live off the detritus of a crumbled civilization. Theirs is a world of children; before reaching the age of twenty, they all die of a mysterious disease they call Posies — a plague that has killed for generations. There is no medicine, no treatment; only the mysterious rumors of a cure.

When her brother begins showing signs of the disease, Ice Cream Star sets off on a bold journey to find the cure. Travelling hundreds of miles across treacherous unfamiliar territory, she will experience love, heartbreak, cruelty, terror and betrayal, fighting with her whole heart and soul to protect the only world she has ever known.

And here’s what Booklist said: “A richly detailed dystopian epic . . . this suspenseful, provocative tale is The Hunger Games meets Lord of the Flies and The Walking Dead, only much, much better.”

I have to say, the phrase “The Hunger Games meets …” annoys me. The whole point of The Hunger Games is to rebel against and eventually pull down a horribly repressive central government. The games are totally artificial in that world. I doubt there’s anything game-like about the world of Ice Cream Star.

So, the book has forty reviews on Goodreads so far and a rating of 3.62. Goodreads uses the same back cover copy as the SFBC, but adds a couple of short paragraphs, including this one: A postapocalyptic literary epic as imaginative as The Passage and as linguistically ambitious as Cloud Atlas, The Country of Ice Cream Star is a breathtaking work from a writer of rare and unconventional talent.

I would say that Goodreads got it right and Booklist got it wrong: this is plainly postapocalyptic, but also plainly not dystopian. Because don’t we generally consider a powerful repressive government part of the definition of “dystopia” when we are talking about current SFF? I sure thought so. Plainly this society, such as it is, must be an anarchy. I don’t know that it’s possible for children to build any kind of greater society, even if they have generations to do so. Notwithstanding Alexander the Great, who started conquering the world before he turned twenty. He did it with lots and lots of adult soldiers. How could you possibly accumulate power or pass it on intact if everyone dies before twenty? Or knowledge, or experience. I don’t think writing alone will do it — and anyway, how are you going to pass along written language under these circumstances? So, anarchy.

Anyway, I’ve been known to enjoy postapocalyptic stories, but this one . . . it sounds good, but hmm. Look at this review from Goodreads, from Scott Rose, posted Oct 8 2014: “As so many others have pointed out, the invented dialect was of the type that I just couldn’t get past. I found myself trying so hard to “just get used to it” to no avail. I must have picked this book up and put it down so many times that that should have been my first sign that it just wasn’t for me.”

Ah. Good to know: the book is written in dialect. That’s very reasonable given the world as designed: generations of kids living in an anarchic world. Of course they’d be speaking some kind of nonstandard dialect by this time. If the author did a good job, this could be fascinating and wonderful. The commenter above obviously hated it.

But here’s another commenter, Megz on June 19 2014: “One thing that takes a while to get used to is the language. Newman has essentially created a new dialect for her characters – I wouldn’t go so far as to call it a new language, but it is kind of a Pidgin English, although that’s not all too fair because it is not at all simplified. It reminds me a little of Valleysmen in Cloud Atlas. Eventually I really started enjoying this dialect, because it’s kind of similar to the way that I think, sometimes. Newman also REALLY displays her prowess when she brings other dialects into her story with other communities.”

That sounds really interesting. I’m putting this book on my Wishlist just for that. It’s not possible to get a sample yet, as the book isn’t officially out, but you can “look inside” from Amazon, so here’s a sample. I hope you appreciate that I had to look back and forth a million times to type this:

My name be Ice Cream Fifteen Star. My brother be Driver Eighteen Star and my ghost brother Mo-Jacques Five Star, dead when I myself was only six years old. Still my heart is rain for him, my brother dead of posies little.

My mother and my grands and my great grands been Sengle pure. My people be a tarry night sort, and we skinny and long. My brother Driver climb a tree with only hands, because our bones so light, our muscles fortey strong. We flee like a dragonfly over water, we fight like ten guns, and we be bell to see. Other children go deranged and unpredictable for our love.

We Sengles be a wandering sort. We never grown nothing from anything, never had no tato patch nor cornfield. Be thieves, and brave to hunt. A Sengle hungry even when he eat, even when he rich, he still want to grab and rob, he hungry for something he ain’t never seen nor thought of. We was so proud, we was ridiculous as wild animals, but we was bell and strong.

So, hmm. This is quite something for Sandra Newman to even attempt. Newman has been around for a while, apparently, writing books about classical Greece and the Incan Empire and so on for kids, and things like The Western Lit Survival Kit: An Irreverent Guide to the Classics, from Homer to Faulkner. I’m impressed and intrigued by what she tried to do with this one, I’ll definitely try a sample and take a look at it, and kudos to the publisher (Ecco; HarperCollins) for taking a chance on a book that must surely be limited in appeal in ways that books like, say, Divergent just aren’t.

Incidentally, I saw a link yesterday . . . oh here it is: a middle school reading list from 1908 compared with a reading list today.

I expect it’s true that many schools and teachers are now emphasizing modern books with familiar vocabulary and syntax, much more so than a hundred years ago. The specific samples provided in the article are actually painful to compare (Nothing But the Truth vs Longfellow’s Evangeline). The former is . . . words fail me, but I would not assign this book in any class ever. It looks like reading it would be like reading one long text message of a kid to his best friend. All those exclamation points make my eyes bleed and the sample provided is just one paragraph. You can take this as a warning if you click through.

Anyway, any young readers who have encountered, both in and out of school, mostly stories written in modern super-casual English, well, yeah, I bet a lot of them will indeed bounce off Ice Cream Starpretty hard.

6 thoughts on “Wait, what’s that definition of “dystopia” again?”