So, I was just reading Patricia Briggs THE HOB’S BARGAIN, a book someone loaned me, so I had to try to read it fairly fast, obviously. I’ve read all of Briggs’ UF, but not all of her secondary-world fantasy, and this was one I hadn’t gotten around to in the past. 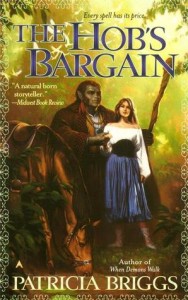 I still like Briggs’ UF best, I think, but I definitely did enjoy this book. The cover pictured above is a good one, that looks about right for the hob. The world is one in which magic was bound a long time ago and has just been released, and stuff happens. The story is fine, but here’s the bit I wanted to pull out:

[I said] “The deeds of the mercenaries must fall upon their captain’s back.” Every man is responsible for his own actions, I thought. But there was too much guilt here. If we didn’t give some of it to the dead, we would all drown in it.

And that, it seems to me, goes beyond the kind of observation where you nod and move on, and into a phrase that kind of captures some basic truth about the human condition in a nutshell. Pretty awesome when you can pull that off! Though no doubt the one phrase that jumps out at a particular reader will vary. But the above is one of just a handful of moments I can think of when an author neatly captured a truth in one pithy phrase or a couple of sentences.

Another for me came in Sharon Shinn’s book FORTUNE AND FATE, when Wen is talking to Justin, and says something like: “I just don’t know how I can go on after that.” And Justin answers, “But, Wen, you already have.”

For me, that moment perfectly captures a basic truth about going on after tragedy: that you just do go on, and eventually you look back and realize that life didn’t stop after all.

Another author who caught something of the same idea was Barbara Hambly in THE DARK HAND OF MAGIC, which was by no means my favorite in that series, incidentally. Things are so unrelentingly bad for so long in that book! Even though the story ends well enough, it’s just such a slog to get to the ending. But at one point, a character who has had both his daughters murdered says, “I mean, I know I’ll get over it. I mean, people do.”

You can just *hear* how emotionally drained that character is at this point in the book. At least in context, you can.

On a lighter note, did anybody besides me have this bit leap out at them from Bujold’s A CIVIL CAMPAIGN?

“Adulthood isn’t a prize they give you for being a good child. You can waste . . . years, trying to get someone to give respect to you, as though it were a sort of promotion or raise in pay. If only you do enough, if only you are good enough. No. You have to just . . . take it. Give it to yourself, I suppose. Say, I’m sorry you feel like that, and walk away.”

Talk about capturing an important truth! Who doesn’t need to hear someone point that out, at some point in their teens or twenties, or even when they’re older?

One more: I don’t remember it exactly and don’t have the book, but there’s one moment in one of Rex Stout’s NERO WOLFE mysteries where Nero says something like this to Archie, after Archie has just failed to save a woman from a murderer: “Archie, you can’t be held responsible for failings you share with all of humanity, such as lack of omniscience.”

I do wonder sometimes whether many (most? any?) other readers find themselves stopping at those particular lines, or what lines I just read over that stop other readers.