In the comments to the previous post, Cheryl mentions that someone is making a movie version of THE MOON AND THE SUN by Vonda MacIntyre. 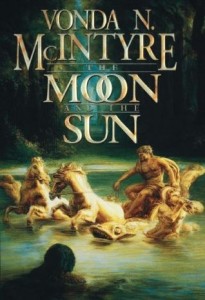 Here’s what Amazon says about THE MOON AND THE SUN, which I see won the Nebula in 1997:

In seventeenth-century France, Louis XIV rules with flamboyant ambition. In his domain, wealth and beauty take all; frivolity begets cruelty; science and alchemy collide. From the Hall of Mirrors to the vermin-infested attics of the Chateau at Versailles, courtiers compete to please the king, sacrificing fortune, principles, and even the sacred bond between brother and sister. By the fiftieth year of his reign, Louis XIV has made France the most powerful state in the western world. Yet the Sun King’s appetite for glory knows no bounds. In a bold stroke, he sends his natural philosopher on an expedition to seek the source of immortality — the rare, perhaps mythical, sea monsters. For the glory, of his God, his country, and his king, Father Yves de la Croix returns with his treasures: one heavy shroud packed in ice…and a covered basin that imprisons a shrieking creature.

And here is a helpful comment from Lisa Jensen at Goodreads, which gives us a clearer picture of the actual story:

Vonda N. McIntyre’s thrilling historical fantasy introduces an entirely unexpected hero: Lucien, Count de Chrétien, war hero, personal advisor to King Louis XIV of France, second most powerful man at court, and well-schooled in the arts of love. Lucien is also a dwarf. But as the only character moral enough to assist the heroine at her impossible task, he sets a standard by which more conventional fictional heroes shrink in comparison. A “sea monster” is captured and delivered into the decadent court of the “Sun King.” Young Marie-Josèphe, newly arrived at court, discovers that despite its leathery skin and twin fishtails, the creature is a variety of human — a “sea woman,” telling stories of her people in haunting songs that only Marie-Josèphe understands. Marie-Josèphe plots to win the sea woman her freedom before the creature winds up an entrée on Louis’ dinner plate. Her only ally is Lucien. What they risk for each other, and what they gain, gives the story resonance, while shifting perceptions of beauty, monstrosity and morality glimmer like phosphorescence on a moonlit sea.

Hmmm. Lisa Jensen’s comment appeals to me quite a bit more than the official description. Here we get a look at the actual protagonist and the conflict and the stakes, all of which are missing from the back cover copy. It does sound like it might be a bit difficult to make into a movie, but it will be interesting to see someone try.

But this makes me think: what other ambitious novels would you like to see made into a movie, but doubt it could be done well? I must say, I wouldn’t have thought THE LORD OF THE RINGS could be done well, but aside from a handful of quibbles, Peter Jackson did a great job. (THE HOBBIT, not so much, but I’m not invested in that because I never cared much for THE HOBBIT.)

One that would be easy and fun: THE WARRIOR’S APPRENTICE by Bujold. I’d love to see that!

Ooh, another that would be delightful and perfectly possible, THE DEATH OF THE NECROMANCER by Martha Wells. Don’t you think that would make a fabulous movie? I wouldn’t change a thing, the characters and plot and setting are all perfect for a movie.

I have to say, I think THE FLOATING ISLANDS would make a beautiful movie. Though I would be distressed if the special effects people gave my dragons bat wings. Feathers, people, read the book. Also semi-transparent. I wonder if they’d get that right?

Now, on the other hand, a work that might be impossible, even with today’s special effects, CJ Cherryh’s FOREIGNER series. Or am I selling special effects short? People can do amazing things today. But only one important human character? And obviously you couldn’t make just one movie. Some producer could just settle back for a decade making one after another.

A work that, like WINTER’S TALE, is probably too broad-scale is John Varley’s GAIA trilogy. Or another: Sherwood Smith’s INDA quadrilogy. All those different povs, and long time scales — those would be hard to handle well. But wouldn’t they be wonderful?

8 thoughts on “What books would you like to see translated to the big screen?”