So, recently I found out about “Winter’s Tale”, the movie version, with Colin Farrill and Jessica Brown Findlay and Russell Crowe and Will Smith. How interesting! Who would ever think of doing a movie version of WINTER’S TALE?

Have you all read WINTER’S TALE by Mark Helprin? It first came out in, let me see, 1983, so I suppose I was in high school when I first read it. 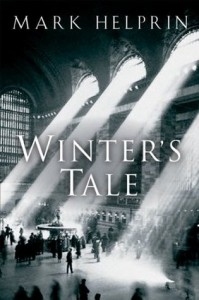 I’ve read it several times by now, and in fact I just read it again because I was curious to see how the movie related to the book. The book itself is the sort of story that requires a good deal of patience from the reader; in fact it’s the sort of story that you are only going to enjoy if you love words and writing, glorious description and high concepts; not so much if you’re into plot and action. So it doesn’t seem, on the face of it, to be the sort of book that is really meant to turn into a movie.

There was a white horse, on a quiet winter morning when snow covered the streets gently and was not deep, and the sky was swept with vibrant stars, except in the east, where dawn was beginning in a light blue flood. The air was motionless, but would soon start to move as the sun came up and winds from Canada came charging down the Hudson.

Beautiful! And then we get multiple detailed plotlines:

1. We open with Peter Lake, an orphan, raised on the streets of New York in the 1800s or maybe the early 1900s. He’s a thief, a decent person who has gotten himself afoul of a dangerous streetgang led by the crazy-in-an-interesting-way Pearly Soames. Peter Lake breaks into a fine home and meets and falls in love with Beverly Penn, who is consumptive and dying. They have a short, intense relationship. She dies. He allows Pearly Soames to catch up to him, but the white horse, far more than a natural horse, carries him out of time through the cloud wall that encircles New York.

The cloud wall? Okay, WINTER’S TALE was the first “magical realism” I ever encountered. The world is like the real world, but with magical stuff woven through it, which no one seems to take much notice of or consider very surprising. The most important magical thing is the cloud wall that surrounds New York. It’s like a maelstrom of mist and anybody who disappears into it vanishes. And sometimes reappears, sometimes many years later, as Peter Lake does, but don’t hold your breath, it’ll take a while.

2. A hundred years later, more or less, Virginia Gamely leaves the village of Lake of the Coheeries, a place that is not quite contiguous with the real world, and goes to New York with her infant son; and she meets Hardesty Marratta, a young man who is searching for a perfectly just city, and they eventually have a daughter named Abby. We also become acquainted with Christiana Friebourg, who in her childhood encountered and fell in love with a white horse that fell like a meteor out of the sky; and Asbury Gunwillow, who has the apartment next to hers but has never seen her, though they talk to one another through the walls; and Praegar de Pinto, editor of the Sun, who runs a campaign based on poetry and passion and becomes mayor of New York; and Jackson Mead, dedicated to forging a bridge out of light that will, one gathers, link Earth to Heaven. There are hints that Jackson Mead might be a fallen angel, though this is not explicit. I’m leaving a lot out, here. As you might gather, nothing in this half of the book feels as focused as the first part involving Peter Lake and Beverly Penn. I imagine this whole part is where a reader who is invested in the early romance subplot falls out of the story with a thud.

3. Peter Lake reappears, and Jackson Mead makes his attempt to build his bridge, and Pearly Soames and his gang reappear, looking a lot less human now, and, well, stuff happens.

Now, see, all through the book, the idea of the perfectly just city trying to “rise” out of our mortal world is absolutely central to the story. The idea of justice and a perfectly just city, of timelessness and a timeless perception, is one that the reader is asked to grapple with over and over. The concept of “justice” is a difficult one, given the plainly evident injustice of New York. So we get passages like this, where early on, Isaac Penn, Beverly’s father, says to Peter Lake:

“. . . I realize there is too much needless and cruel suffering. But you, you don’t seem to understand that these people whom you profess to champion have, in their struggles, compensations.”

“Their movements, passions, emotions; their captured bodies and captured senses are directed with no less certainty than the microscopic details of the seasons or the infinitesimal components of the city’s great and single motion. They are, in their seemingly random actions, part of a plan. Don’t you know that?”

“I see no justice in that plan.”

“Who said that you, a man, can always perceive justice? Who said that justice is what you imagine? Can you be sure that you know it when you see it, that you will live long enough to recognize the decisive thunder of its occurrence, that it can be manifest within a generation, within ten generations, within the entire span of human existence? What you are talking about is common sense, not justice. Justice is higher and not as easy to understand – until it presents itself in unmistakable splendor. The design of which I speak is far above our understanding. But we can sometimes feel its presence.”

What Helprin is trying to express, I think, is the kind of divine plan that you have to step outside of time to perceive; the plan that is perceptible to God and not to men. Except in this book, sometimes people catch glimpses of it – Beverly, who is dying, sometimes sees visions of the timeless world that exists beyond our world.

“They mean to me that the universe . . . growls and sings. No, shouts. . . . Like a dog, but low, low. And then it shouts, mixed voices, tones, a white and silver sound. . . . The light is silent, but then it clashes like cymbals and arches out like a fountain, to travel and yet be still. It crosses space without moving, on a fixed beam, as cleanly and silently as a pillar of ruby or diamond.”

Helpin also provides philosophical asides, not in any character’s voice, but directly:

. . . . To enter a city [with your soul] intact it is necessary to pass through one of its new gates. They are far more difficult to find than their solid predecessors, for they are tests, mechanisms, devices, and implementations of justice. There once was a map, now long gone, one of the ancient charts on which colorful animals sleep or rage. Those who saw it said that in its illuminations were figures and symbols of the gates. The east gate was that of acceptance of responsibility, the south gate that of desire to explore, the west gate that of devotion to beauty, and the north gate that of selfless love. But they were not believed. It was said that a city with entryways like these could not exist, because it would be too wonderful. Those who decide such things decided that whoever had seen the map had imagined it, and the entire matter was forgotten, treated as if it were a dream, and ignored. This, of course, freed it to live forever.

So, how in the world can all this be handled in a single two-hour movie? It can’t, of course, and the writer and director – it was Akiva Goldsman, if that means anything to any of you who might be movie buffs. Anyway, Goldsman didn’t try. Instead, he took the early subplot with Peter Lake and Beverly Penn and kept that nearly intact. He kept a ton of details – the story of how Peter Lake came to be orphaned on the streets of a New York, the stars in the roof of Grand Central Station, actually I’m impressed by how true to the book he kept this part of the movie.

Then he ditched most of the rest of the novel, but retained small fragments (notably Virginia Gamely and her daughter Abby), working them into a much simpler good-vs-evil storyline: He made Pearly Soames into a demon under the direct authority of Lucifer, and made the white horse into a guardian angel. Then he added a single brand-new touch in order to pull the movie together: he set it up so that anyone may carry within them the seeds of one miracle – but it’s never a miracle for themselves. Each miracle is meant for someone else. Peter Lake is carrying a miracle meant to save the dying Beverly Penn . . . or is he?

Then Goldsman cast Peter Lake forward in time, just as happened in the book (although with a different explanation for how this happened), and we whoosh through a very much streamlined plot with a direct conflict between good and evil. (Spoiler: the good guys win).

How did this work? Well, if you go into the movie knowing that it can’t possibly do everything the book did, then it actually works fine. It’s a charming movie with a pleasantly straightforward story about true love and the unexpected ways that miracles work themselves out, enhanced by nice scenery, good acting, and a really beautiful white horse. I’m going to watch it again now that I’ve re-read the book

The one thing that didn’t work for me at all was Will Smith as Lucifer. I have no idea what Will Smith is like in the real world, but as an actor, he kind of radiates a nice-guy aura, don’t you think? Anyway, *I* think so. He didn’t work as Lucifer for me – not nearly evil enough. That wasn’t a problem with Russell Crowe. He made Pearly Soames into a thoroughly scary dude. And Colin Farrell and Jessica Brown Findlay were good.

The bottom line: the movie is pleasant to curl up with on a cold winter night, especially if you love white horses that fly. The book, on the other hand, is a story for a patient reader who loves gorgeous writing to sink into when in a meditative frame of mind. It’s definitely a winter book, guaranteed to make you long for a pair of skates and an endless frozen lake, followed by a roaring fireplace and a mug of hot chocolate. If you’ve never read it, then, well, it *is* the middle of January, a good time to give it a try. If you have read it, what did you think?