I picked up this five-page handout last semester. Some student gave me a copy; their teacher had passed these out when talking about how to write a narrative essay, which incidentally is not a term I’m just in love with. A narrative essay: do you mean a narrative or an essay? I know, I know, the term is meant to describe an essay that uses narrative to make its point, but this seems a bit subtle for English Comp I in a community college where — I am not trying to be snarky, this is just a statement of fact — a large minority of the students are reading and writing at about the fifth-grade level or below.

So, in general, when assigning a narrative essay, the instructor requires dialogue. And of all the handouts that a student can perhaps do without when learning to write dialogue, a five-page handout listing about a million possible alternates to “said” strikes me as the one to drop. It is almost entertaining, also a bit frightening, to imagine how the instructor (I don’t know who it was) might have introduced this handout. “Said is so boring! Be sure and use alternates whenever possible!”

Now, I do not agree that “said” is uniquely invisible , because I have found it far too visible when overused. Nevertheless, consider the following list of “a” alternatives to “said”:

Now, some of those could perfectly well be used as dialogue tags, and in fact if properly used they would vanish gently into the text. “Appealed” could not, in my opinion. Listen to this:

“You have to reconsider,” she appealed.

“No, listen, this is terribly important,” she appealed.

You see? Perfectly dreadful. There’s nothing wrong with the word, but as a dialogue tag, no. Just no.

“Articulated” is even worse, especially since I can’t help but think about the articulation of bones when I see the word. “Avowed”? I don’t think so, not even in the highest of high fantasy. “Alluded”? Are you kidding me?

Acknowledged, added, admitted, agreed, announced, argued — I would say that set could be used as tags. The rest are iffy or impossible. (Okay, close to impossible, I’m sure you could use even “alluded” as a tag if you were sufficiently determined.)

This list has about 230 words — I didn’t count, that’s a rough estimate. Two hundred and thirty! I don’t know whether to laugh or weep at the idea of English Comp I students being told that all these words are suitable dialogue tags and they should avoid “said.” Not, I repeat, that I know how the instructor presented this handout; maybe it was with a “use with caution” label. But still, if you provide it, you are implicitly endorsing it.

Incidentally, the handout *I* most often offer students is the one that shows comma usage in dialogue. Of course you could just look in any novel to see how dialogue is handled — I remember doing exactly that when I started working on my very first book ever (I looked at Bujold) — but a handout that clearly shows how to integrate dialogue into text is still a handy thing.

Also, I would like to see the narrative essay dropped from the class. One semester is too short even to focus on normal expository essays. Why complicate the issue with narrative? Offer a different class in fiction and narrative nonfiction writing instead. But that’s just me.

Dictated, foretold, voiced — voiced, seriously? It’s enough to make me throw up my hands and declare, “For heaven’s sake, stick to ‘said!'” 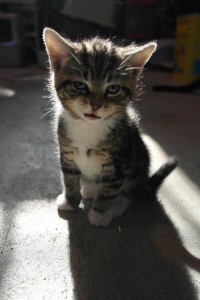