A must-read post by Kameron Hurley, about the confluence of hard work and luck.

Full disclosure: I haven’t actually read The Mirror Empire, or anything else by Hurley. Surely some of you have. Thoughts? 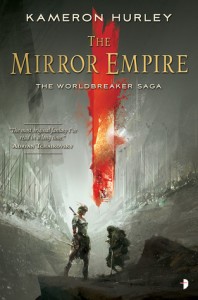 Here’s what Goodreads says about The Mirror Empire, btw:

On the eve of a recurring catastrophic event known to extinguish nations and reshape continents, a troubled orphan evades death and slavery to uncover her own bloody past… while a world goes to war with itself. In the frozen kingdom of Saiduan, invaders from another realm are decimating whole cities, leaving behind nothing but ash and ruin. As the dark star of the cataclysm rises, an illegitimate ruler is tasked with holding together a country fractured by civil war, a precocious young fighter is asked to betray his family and a half-Dhai general must choose between the eradication of her father’s people or loyalty to her alien Empress. Through tense alliances and devastating betrayal, the Dhai and their allies attempt to hold against a seemingly unstoppable force as enemy nations prepare for a coming together of worlds as old as the universe itself. In the end, one world will rise – and many will perish.

To me, I must admit, that all just sounds . . . cluttered. Back cover copy is hard to write, I know! But this doesn’t do it for me. What do you all think?

4 thoughts on “On Not Giving Up”