So, I’ve been working my way gradually through Tom Shippey’s JRR TOLKIEN: Author of the Century, which is very dense, but interesting. 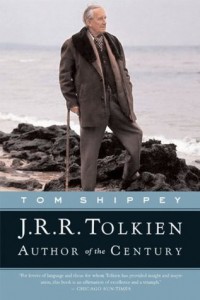 This isn’t a collection of LotR trivia. It’s a serious analysis of the structure of the books, of the nature of evil in LofR, and so forth. Let me see. The Hobbit: Re-inventing Middle Earth. The Lord of the Rings: Mapping Out a Plot. The Lord of the Rings: The Nature of Evil. And so forth. Mind you, no on has to justify to me the idea that Tolkien is a serious contender for Author of the Century. I agree with that already. I hadn’t realized how vehemently the Literary Intelligentsia hated Tolkien, but it doesn’t surprise me: How can they be sure they’re superior to the hoi polloi if they appreciate a popular book?

Anyway, I’m more than halfway through the book and still plowing ahead. I want to go back and re-read parts of Tom Simon’s Writing Down the Dragon after this.

Meanwhile, much lighter: Defending Your Castle by William Gurstelle 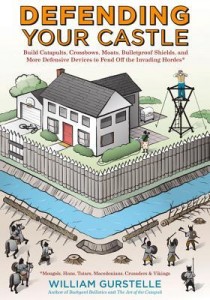 This is such an entertaining book, though mostly aimed at people who have kids who love hand’s-on projects. I mean, Gurstelle really does provide explicit, detailed directions for building catapults and crossbows and so forth. The Crouching Tiger catapult he offers is, he declares, perfect for hurling four-inch water balloons across a typical backyard, but in case of an actual Mongol attack, can be easily scaled up.

Of course part of the point is to include brief history lessons about the Mongols and Tamerlane and Vikings and so on. These bits are brief, but vivid.

I have no actual plans at this point to write a post-apocalyptic story like, say, Dies the Fire. But if I did, this book would be an enormously helpful resource.

Moving on: The most interesting nonfiction book I read lately was Wolves , edited by L David Mech and Luigi Boitani, which is the most current work on wolves I could find. 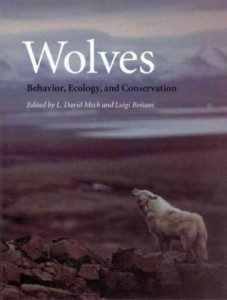 I wanted to review and update my knowledge of wolf behavior before writing that post on Monette’s and Bear’s A Companion to Wolves, see, because grad school was a while ago and I wanted to make sure I was reasonably current. It turns out I’d read other work that arose from current studies of wolves, so that part was okay, though it was fascinating getting into the details of wolf dispersal (typically wolves disperse about 60 miles from their natal pack, but there’s a very wide range and some wolves will disperse up to 600 miles, which is incredible), mortality (an average of 25% of all the wolves in a population die of natural causes every year, though again there is a very wide range), and hunting efficacy (did you know that a young adult moose is essentially impervious to wolves, even a very big pack? Even an antlerless cow will stand her ground if healthy, and if they can’t make her run, after five minutes or so the wolves will leave to find easier prey).

Oh, and it seems that gray wolves aren’t endangered anymore, which is great. They rebound so fast from small remnant populations that unless a really serious, dedicated effort is made to eradicate them, they’re probably safe. This is great! — Although I’m not seriously keen on having wolves recolonize Missouri, since they will sometimes go out of their way to kill dogs, just as they will kill coyotes. I wonder if a five-foot fence is adequate to keep them out of a yard? As it happens, right now we’re getting black bears colonizing Missouri from Arkansas, which I also feel ambivalent about.

Anyway, the most interesting part, new to me, was the analysis of molecular genetics and anatomy as applied to the red wolf. My impression 20 years ago was that probably red wolves were not a distinct species, but a population of wolf-coyote hybrids. This was a popular hypothesis at the time, but now it doesn’t seem to be true.

Okay, look, the ancestors of wolves evolved in North America, okay, and then some emigrated to Eurasia. Then the two continents gave rise to different species in the Canis genus, with dire wolves evolving in America and true wolves evolving in Eurasia. Then the Eurasian wolves returned to North America in several distinct waves of immigration, one of which constituted the arrival of the gray wolf, Canis lupus, and another of which the arrival of the red wolf, Canis rufus. (This isn’t perfectly certain, but it all looks highly likely, though I’m sure taxonomists are still arguing around the edges.) Dire wolves appear to have been sympatric — shared ranges with — gray wolves, red wolves, and coyotes, all of which appeared at that time to be quite distinct. Then dire wolves were outcompeted, most likely because so many of the megafauna species became extinct and the smaller wolves were more suited to prey on the smaller ungulate species that were left. 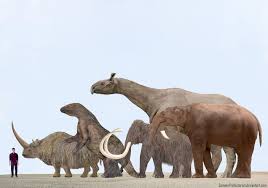 The megafauna were really, really big

In the present day, most gray wolves appear to be basically the same genetically, although a handful of subspecies are recognized; red wolves and gray wolves seem to have possibly hybridized in the Northeast, giving rise to Canis lupus lycaon, which on the basis of genetics and anatomy quite likely should be renamed and grouped together with Canus rufus , since it shows more similarity to red wolves than gray.

Okay, now the problem for red wolves is that — look, did you know that the coyote range used to be restricted to the west the continent? That they were restricted to a range that was largely west of Arkansas and Tennessee and Ohio? I had no idea. But the elimination of wolves and the restructuring of the ecosystem by agriculture opened up the east to coyotes, which now, of course, occur from coast to coast. And, here is the problem: Although gray wolves kill coyotes when they can and seldom if ever interbreed with them, red wolves seem more inclined to breed with coyotes. They’re not all that keen on it in general, but they don’t reject coyote mates all that vehemently. And although the red wolf breeding project might have managed to locate and breed true red wolves, and establish populations in the eastern US, I don’t see how anybody is going to prevent hybridization forever if the two species do not avoid it themselves, because coyotes certainly aren’t going anywhere.

So that’s a bit sad. Although also not really, since it’s the kind of thing that must happen all the time, unobserved, between closely related species, and in a hundred thousand years, either way, it’s just a footnote in Canid history.