For example, here’s one at Black Gate about medieval civilizations on the Horn of Africa.

Due to its location on the Red Sea, the northern Somali region has always been part of an international trade network. For many centuries, however, the main focus of the trade was in what is now Eritrea, which was the coastline of successive Ethiopian empires that traded with Egypt and out into the Indian Ocean. Two eastern outlets are in what’s now Somaliland, the port of Zeila and Berbera. Trade routes led east from the Ethiopian highlands and crossed a short stretch of desert to get to the coast. … Mogadishu at this time was one of the largest cities on the Swahili coast, with houses and mosques made of coral and a thriving marketplace that controlled the trade in gold from the south. The Sultanate of Mogadishu, which lasted from the 10th to 16th centuries, built elaborate public and private buildings. Excavations have uncovered coins from China, Sri Lanka, and Vietnam. A large weaving center made cloth for Egyptian and Syrian markets. Silver coins minted in Mogadishu have been found as far away as the Persian Gulf.

Houses made of coral! How about that?

Then here’s another post from Black Gate, about Axum, an ancient empire in Ethiopia.

Axum is a little-known civilization. It didn’t leave much in the way of writing and its sites have not been extensively excavated. Even its capital city has been little explored. We do know that it was founded in the fourth century BC and became a major power by about 100 AD. It came to control most of what is now Ethiopia and Eritrea, and then hopped over the Red Sea in the third century to take over parts of what is now Yemen and Saudi Arabia. For a time it controlled trade through the Red Sea and acted as a link between the Roman Empire and India. Axumite coins have been found as far away as China. Greek writers noted Axum as one of the world’s great civilizations.

Also, I would bet that the Lion Hunter series by Elizabeth Wein — a great series, my personal favorite is THE SUNBIRD — is set in Axum. That is, it’s set in the Ethiopian kingdom of Aksum, and that sure sounds the same to me. 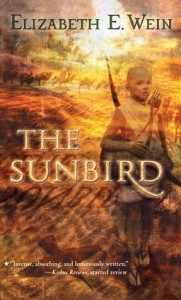