So I’ve been reading only SF lately because of SF Month, except unfortunately I haven’t liked a couple of the books I’ve read recently enough to review them. I’ll just tell you: it was FOR DARKNESS SHOWS THE STARS by Diana Peterfreund and SHIP BREAKER by Paolo Bacigalupi. I did like them both, actually, but not enough to write a review. The former suffered because I knew it was supposed to be an SF retelling of PERSUASION and it did stick quite closely to the original plot and even the names from PERSUASION. Wow, do you ever set yourself up for a negative comparison when you try to follow Jane Austen. Peterfreund’s writing kept annoying me because it wasn’t Austen, and more than that, when you strip out the writing, the actual plot of PERSUASION is an angsty romance and I simply spent the whole time rolling my eyes.

Then I did like SHIP BREAKER, only . . . not that much. I liked it a lot at the beginning and then started to have issues with it as it went on. (Nailer’s druggy father really kept focused enough to track him down on a cross-country flight? Really?) And partly because of the use of Nailer’s evil father as The Bad Guy, the plot seems very predictable. We just know the father is going to be right there over and over, reappearing magically at the right time to be scary, and that the final battle will be between Nailer and his father. Poof, there that final battle is, zero surprise. And besides that, well, I don’t know. To me, the characters seemed to kind of flatten out as we went on. And the ecological message is heavy-handed — at least once Bacigalupi speaks to the reader directly because there is simply no way Nailer would think about Orleans in the terms he does. He doesn’t even have the vocabulary, except now and then when Bacigalupi forgets his character’s limitations because it’s so important to deliver the Message.

Well, that sounds too negative. Actually, I did like the story fairly well. I see the sequel starts off with Tool, the half-man, as the protagonist. I thought Tool was by far the most interesting character, so I may go on and pick up the sequel.

But then I really wanted to read a top notch SF story if I could, so that I could review it for SF Month. So I went back and re-read THE ADORATION OF JENNA FOX by Mary Pearson because I loved it when I first read it and because I’ve had the sequel on my TBR shelves for a while. 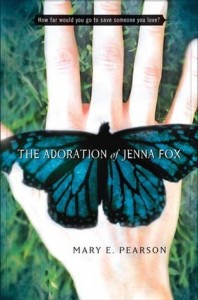 I used to be someone.

More. But I’m not sure what.

“Jenna, come sit over here. You don’t want to miss this.” The woman I am supposed to call Mother pats the cushion next to her. “Come,” she says again.

“This is an historic moment,” she says. She puts her arm around me and squeezes. I lift the corner of my mouth. Then the other: a smile. Because I know I am supposed to. It is what she wants.

“It’s a first,” se says. “We’ve never had a woman president of Nigerian descent before.”

“A first,” I say. I watch the monitor. I watch Mother’s face. I’ve only just learned how to smile. I don’t know how to match her other expressions. I should.

“Mom, come sit with us,” she calls out toward the kitchen. “It’s about to start.”

I know she won’t come. She doesn’t like me. I don’t know how I know. Her face is as plain and expressionless to me as everyone else’s. It is not her face. It is something else.

“I’m doing a few dishes. I’ll watch from the monitor in here,” she calls back.

She comes and stands in the arched doorway. She looks at Mother. They exchange an expression I try to understand. Mother’s face drops into hre hands. “She’s your nana, Jenna. You’ve always called her Nana.”

“That’s all right. She can call me Lily,” she says, and sits down on the other side of Mother.

This is the first chapter of THE ADORATION OF JENNA FOX, which I first read when it came out, in 2008. I really enjoyed it and thought it was very well put together, and I still think so after just re-reading it a few days ago.

It’s beautifully written, with a spare, straightforward style that unobtrusively creates Jenna’s voice and draws the world around her. The mysterious world, because Jenna has just woken up from an eighteen-month coma and finds everything about her life baffling. Her memories are not just spotty, but highly peculiar She remembers how to speak, but not exactly what words mean, so she has to look them up:

She knows her mother is her mother – or at least she has been told so – and as she watches videos her parents took of her as she grew up, she can see how much she was loved. And she can see how hard she tried to deserve that love. But she doesn’t remember any of that. And beyond the wasteland of her personal memory, everything just seems . . . odd.

This is at its heart a story about family and love and the importance of self-determination, and most of all about what it means to be human. The first time I read it, I was afraid the ultimate message was going to be anti-science, but I’ll give this much away: in the end that is not the case. Not only that, but this is one of the tiny handful of SFF titles that both makes modern Christianity a visible part of life and gives religion a positive spin: though the story could have presented an underlying faith vs science opposition, it didn’t do that, either. This one is a winner in every sense: unusual, beautifully told, with a plot that you sort of see coming, but not exactly.

I just finished the second book, and here’s my take on that: THE FOX INHERITANCE is not a bad book, and a lot about it is good, but it is not in any way necessary. The first book in many ways is superior taken as a stand alone; I think it loses a little bit when you read the sequel. But only a little bit; if you really love the first book and want to go on with the sequel, that’s fine!

Where ADORATION is a slow, introspective story, THE FOX INHERITANCE is much more action-packed, though it deals with some of the same themes as the first book, especially the what-it-means-to-be-human thing. It is much more futuristic, set a little more than 250 years in the future, and I do like how Pearson handles that, with all kinds of surprising things that you can see possibly existing but almost no explanations. I can see this turning off some readers, but I liked how someone would casually mention the partitioning of America and then the story would just go on.

However, I found many important aspects of the plot highly predictable and reading about Kara highly unpleasant. I did go on to order the third book, which is clearly a direct sequel of the second, so obviously I found it good enough for that. Especially since the problem with Kara has now been solved. But my personal recommendation is: the first book is definitely a thumb’s up, but there’s perhaps no need to rush into the sequels — and you may not feel much impulse to go on because the ending of the first book is beautiful.