Okay, so I’m still having trouble with comments, so if you have a comment, please email me at rneumeie@gmail.com and I’ll post it myself, okay? The problem is being worked on, so hopefully it’ll be fixed soon.

Mary Beth emailed me a comment about Cherryh’s “horses” in the CLOUD’S RIDER duology as aliens (though not quite sentient, maybe). 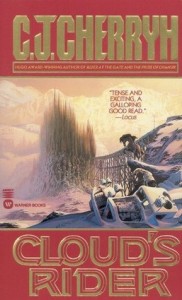 Though I did like the horses in those books (“I want bacon!”), this duology wasn’t my favorite of Cherryh’s work, and I said so, and we had a conversation about dangerous carnivorous horses compared to My Pretty Pony Pal horses in fantasy, and about Cherryh in general, and I realized that really there have been quite a few Cherryh books that were not my favorites. So, here’s my top five picks for Cherryh, not necessarily the ones I’d recommend to just anybody new to her work, but my personal favorites. And my personal bottom five, just for balance.

1. The Chanur series. Love it. Aliens and action and spaceships and complicated politics, and actually I think you can see Cherryh’s growth as a writer when you compare the first three with the fourth that was written later (Chanur’s Legacy).

2. Cuckoo’s Egg. The reason I didn’t put this in my “Great aliens” post is because the point of the story is not to make the aliens alien, exactly. Culturally they are distinctive, but psychologically they are imo quite human, and deliberately so. But it’s a great book, a standalone, short, with an intimate feel, truly one of my all-time favorite stories.

3. The Foreigner series. Okay, I love it, but I wouldn’t really suggest someone new to Cherryh start with a fifteen book series. Hah hah hah. No. But it is one of my favorites. Here’s Ann Leckie’s comments about the first book, which clearly explains both why I love this series and why I wouldn’t expect it to work for just everybody.

4. Paladin. This is one of Cherryh’s fantasies, one set in an alternate China. 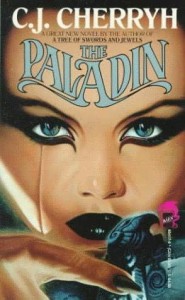 This is a wonderful story, very closely focused on just one POV character. My guess is it would probably seem too slow to some readers, but I love the day-to-day feel of the story. Actually, in some ways it reminds me of A Stranger to Command by Sherwood Smith — both emphasize day-to-day detail of military training. Anyway, Goodreads says: “Now betrayed by the Emperor he once protected, master swordsman Saukendar leaves the way of the sword behind him forever–so he thinks. When a headstrong peasant girl burning to avenge her murdered family demands that he train her, Saukendar is faced with a momentous choice. Send Taizu away, never see her again–or join her and destroy the tyrant who has nearly destroyed them both.” This is basically true, although the story opens years after Saukendar retires from the world.

5. Cyteen. I’ve re-read this one a bunch of times, though I must admit I skip ahead till young Ari appears. I loved the sequel, too, though for me Regenesis was all about watching Justin and Grant and Ari and everyone get their lives in order and only a tiny bit about actually finding out who initially killed the older Ariane Emory.

The bottom of Cherryh’s barrel:

5. Forty Thousand in Gehenna. Watching the slow-motion destruction of the society established on Gehenna is just rather painful, especially since we see a good many people live not very pleasant lives during that part, so the whole first two-thirds of the book are not a very enjoyable read, at least not for me. I liked it better once we skip forward to the new, altered society that eventually grows out of colony.

4. Wave Without a Shore. Too weird for me, or something. It’s been a long time. Maybe I should try it again. But the fact that I’ve never re-visited it says something right there.

2. Faery in Shadow. Caithe mac Sliabhan is under a curse that can’t be broken, only sort of slanted to be a little less cruel. The whole thing is just too grim for me.

1. The Rusalka series. I read the first book, didn’t like it, bought the second book, never actually picked it up off the shelf, and eventually gave them away. This was Cherryh’s only Total Failure for me, since I did keep all the rest of her books, even those I haven’t re-read. Now I’m sort of inclined to go back to Wave Without A Shore. Maybe I’d like it better now.

How about you all? If you’re a CJC fan, what are your top and bottom picks? Are they totally different from mine?

Remember, if you can’t comment in the ordinary way, just email me at rneumeie@gmail.com

Elaine T says: Way up at the top of the bottom list is DOWNBELOW STATION. It never worked for me. But I keep it because stuff in it is central to so much of her other sf.
Agree on Faery in Shadow. A friend of mine on a mailing list that CJC participated in swears the author thought FiS was a comedy, BTW. My friend and I agree that we don’t see how. Voyager in Night & Port Eternity, Brothers of Earth and the Hunter thing. Hestia.

Ones I revisit or that haunt me:

SF: Finity’s End, Rimrunners, 40K (I think I’m trying to understand it….) CYTEEN, CHANUR (all of it), WAVE WITHOUT A SHORE, parts of Foreigner, but not all of it, FADED SUN TRIPOINT, FORGE OF HEAVEN (maybe for the fashionistas).

Fantasy: Paladin, Goblin Mirror, FORTRESS (all but ICE which I pretend never happened), RIDER/Finisterre (I know it’s a planetary colony, but it reads like a Western crossed with sf/f elements, ok?), assorted short stories like THE LAST TOWER and a couple from Sunfall… The Teen was really taken by the Rusalka trilogy and I’ve had to reread it recently to be able to discuss it with her as she wants – it’s better than I remembered, and the last book definitely improved with her rewriting it. OTOH, said Teen has also created a Character Irrationality Scale and named it for one of the Rusalka characters who is extremely irrational.

And at this moment I’m rereading SERPENT’S REACH.

Me: I love the phrase “At the top of the bottom list.” Yep, that’s how I feel about 40 Thousand in Gehenna. And in fact I feel pretty much the same way about Downbelow Station, too. I see you didn’t limit yourself to five: that’s cheating!

I really like the Faded Sun trilogy and The Goblin Mirror; actually I also really like Voyager in Night and Hunter of Worlds (not so much Port Eternity, but I don’t hate it). Ugh, I’d forgotten about ICE, which I also pretend never appeared and is definitely on my bottom-five list, but I love the rest of the Fortress series.

A comedy, seriously? I don’t get that any more than you.

And I love love love the idea of a Character Irrationality Scale, but I don’t plan to re-read Rusalka in order to peg it to the irrational character in that one. I could use Julie from Set This House in Order, though.

11 thoughts on “Another look at CJ Cherryh —”