This was another great panel! Alas, not so well attended, which is what you expect at a ten AM panel, I guess. It was a pleasure to join the other panelists — Walt Boyes, Aimee Kuzenski, Ross Martinek, and W.A. Thomasson. Aimee had included a character with schizophrenia in one of her books and the others have one or another disability. I, of course, don’t have a serious disability nor have I written a character with a typical disability, although of course Kes in the Griffin Mage trilogy is cripplingly shy and Buguchren is a very small man (if you care to count that as a kind of social disability, which I think is fair).

The best bit: When we ALL agreed that if the reader can tell that you included a character with a disability as a political statement, you have failed as a writer. It sounded like everyone else hates that kind of blatant preachiness as much as I do. I think we also all agreed that it’s not necessarily going to seem terribly inclusive to write a character with a disability and then have the character magically cured before they live happily ever after, as though only beautiful, healthy people deserve happy endings.

The worst bit: I never quite had a chance to share my complete list of disabled characters from SFF (mostly). Since you all contributed massively to that list, I will now share it with you, adding in a couple of other characters with disabilities mentioned by the other panelists:

These days, autism is not a real diagnosis, imo, because the one term clearly encompasses multiple conditions. However, here are a handful of characters that fit one or another type of autism:

1. Lou Arrendale from THE SPEED OF DARK by Elizabeth Moon. I’m not the panelist who mentioned this one first, but I definitely agree that this fabulous book should have won every award the year it came out (it did win the Nebula). If you haven’t read it, YOU SHOULD. Then by all means tell me what you think of it. 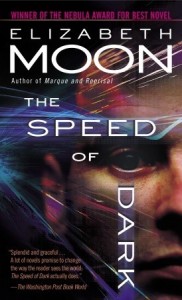 2. Nicola from LIBRIOMANCER by Jim Hines.

3. Michael from SILENCE (Queen of the Dead) by Michelle Sagara

4. A minor character from ROYAL AIRS by Sharon Shinn — I don’t want to name the character; read the book yourself. This I one of the very, very few characters with a real mental disorder that I’ve ever seen in fantasy — it occurred to me, and the other panelists agreed, that it’s easier to think of disabled characters with mental or emotional disorders from science fiction and that this is much less common in fantasy, except possibly for PTSD.

Characters with other mental illness:

5. Michael from THE HOLLOW CITY by Dan Wells (Schizophrenia)

7. Both protagonists from SET THIS HOUSE IN ORDER by Matt Ruff (multiple personality syndrome)

8. Rufus from LOCKE AND KEY by Joe Hill

10. A child in THE LOST BOYS by Orson Scott Card

11. Jonathan and all the other kids from BROTHER JONATHAN by Kilian Crawford — though I am not altogether happy with the magic cure; still, read it and see what you think.

Characters who are blind or deaf:

12. Po from GRACELING by Kim Cashore

13. Saiara from THE CHANGING OF THE SUN by Lesley Smith

15. Piper from FIVE FLAVORS OF DUMB by Antony John

Characters who are missing a hand, have a damaged leg, or are in a wheelchair:

16. Eugenides, duh. Don’t know why I didn’t think of him at once myself. From the Queen’s Thief series by Megan Whelan Turner, of course.

17. Dag, also duh, from The Sharing Knife series by Bujold.

18. Alan, from THE DEMON’S LEXICON by Brennen.

19. Gian, from WAITING FOR THE LAST DANCE by Lazette Gifford

20. Robin, from the Niccolo series by Dunnett.

Characters with other physical disabilities:

22. Waldo, from the story of the same name by Heinlein

24. Glokta, from THE BLADE ITSELF by Joe Abercrombe

26. Narses from THE BEARKEEPER’S DAUGHTER by Gillian Bradshaw

27. Beguchren from The Griffin Mage trilogy by me

28. Summer from PIG’S DON’T FLY by Mary Brown — who gets thin without really noticing, which to me is highly questionable

29. Elisa from GIRL OF FIRE AND THORNS by Rae Carson — who also slims down, though imo Carson handled that better

30 Sergeant Jackrum from MONSTROUS REGIMENT by Terry Pratchett. Hah! I bet you all forgot about that one, didn’t you? Note that being overweight is not a social disability for Sergeant Jackrum — but then no one knows that Jackrum is a woman, either, until right at the end.

There! I’m sure this is a thoroughly incomplete list, but at least it’s a start.