So, is SET THIS HOUSE IN ORDER actually a science fiction novel? Or is it a contemporary fiction title, meant to illuminate the possible experience of a person with multiple personality syndrome? 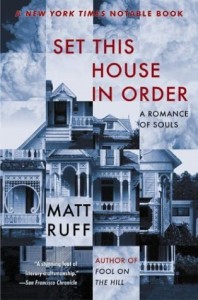 I read the whole book without once thinking about that – I read it as SF/Fantasy. But now I’m not sure. Because, now that I come to look back on it, there are actually zero SFF elements in this story, even though the reading experience is very much an SFF experience. SET THIS HOUSE IN ORDER could be read as a character study folded into a suspense plot. The point is not really the suspense; the intent of the story seems to be to bring multiple personality syndrome to life for the reader, offering not one but two takes on the experience of coping with multiple personalities.

Is the picture presented to the reader “true” or “accurate”? I don’t really know, but I think it could be. I’m not a psychiatrist or psychologist, although I’ve read a good bit of nonfiction in the field because it’s interesting. It seems to me that the author has done quite a bit of research and tried to present an interpretation of multiple personality syndrome that is true to the actual condition. I like the way the condition is presented – as a functional, protective response to early-onset, severe, long-term childhood torture. I think that is the correct way to view multiple personality syndrome, which is why I don’t like to call it multiple personality disorder. It certainly can ultimately lead to dysfunction, but that’s not the same as, say, OCD or paranoid schizophrenia, which are conditions that are, as far as I know, strictly pathological and dysfunctional.

Andrew has his personalities (souls) fairly well in order, or at least it seems so at first. Penny doesn’t yet understand why she loses time or why notes mysteriously appear, reminding her that she’s starting a new job or that she has an appointment for lunch. I like all the characters, but I particularly love Penny. One of my very favorite details is how Penny disposes of her mother’s ashes, after her mother has a stroke and dies.

Anyway, through Andrew’s and Penny’s experiences, we are offered different ways of looking at multiple personality syndrome and different metaphors to understand the way the personalities appear and develop and function. Ruff also manages to make the different personalities distinct and show what important roles various personalities play, and what accommodations they can make with one another in order to create a functional life from a shattered childhood. This is all really well handled.

As an interesting touch, the most dysfunctional person in the story, Julie, does not have any diagnosed emotional or psychiatric problem. I mean, I don’t want to downplay what Penny goes through at first, but over the course of the story and particularly in the final chapter, which is really an epilogue, Penny becomes a quite functional person. Andrew had the job partly done to start with and had already made a decent life for himself at the time the story opens.

This is not true of Julie, who is a mad dreamer at the beginning and a mad dreamer at the end, the sort of person who leaps into wild plans, does not allow for obvious contingencies, loses everything, and leaps undeterred into the next wild plan, sowing chaos all around herself as she goes. Julie is impulsive, impractical, emotionally manipulative, and thoroughly self-centered. She is the sort of person who is always at the center of her own drama and wants everyone else to revolve around her, too. She is presented rather positively through Andrew’s eyes – he is her friend and at least imagines he might like to be more – but I must say, I thoroughly disliked her.

It didn’t occur to me till after I finished the book that it could hardly be accidental that Andrew and Penny are contrasted not only with each other, but with Julie. At the end, Julie is the one whose life is least in order. In fact, lots of the non-diagnosed characters are in fact coping with some peculiar psychological issues. Some cope extremely well (Mrs Winslow) and some very badly (Chief Bailey), but we sure do get a whole range of “normal” people who are not, on second thought, necessarily as normal as all that.

So, this is a fascinating story in all kinds of ways.

It’s also catchy. I read it fast, without wanting to put it down – I stayed up quite a bit later than I meant to and actually dreamed about it after I went to bed. (Really.)

I also want to mention that Ruff does an amazing job of making the childhood abuse suffered by both Andrew and Penny quite clear, without ever making the awful details too immediate or too vivid. Ruff handles all that childhood horror with such care that you can probably stand to read this even if you can’t bear child-torture scenes.

Whatever else it is, SET THIS HOUSE IN ORDER is a tribute to the ability of the human spirit to recover its integrity – for a broad definition of “integrity” – after the most appalling abuse. I will definitely be looking up other work by this author. In fact, I’m staying with my brother in Chicago and he just handed me FOOL ON THE HILL, so I won’t have to look very hard.

2 thoughts on “Recent Reading: SET THIS HOUSE IN ORDER by Matt Ruff”