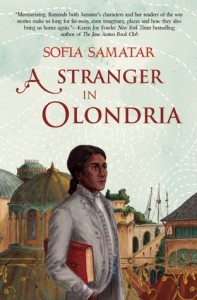 I am so bad; I still haven’t read it, or indeed any of the other nominees except Marie Brennan’s A NATURAL HISTORY OF DRAGONS. I went to a panel where Sofia and others discussed language in fantasy; it was a good panel and did leave me with a desire to read STRANGER. Eventually I’m sure I will. My personal feeling on language in fantasy, btw, is that you can sure spend ALL YOUR TIME worldbuilding if you wish, but every hour you spend designing a beautiful language with a complete syntax is an hour you’re not writing. Which is fine! As long as your hobby is worldbuilding rather than writing. Apparently Sofia speaks two languages fluently and three others enough to get by. Wow.

The panel did emphasize that the most important thing is to get the names to all sound like they came from the same language (unless you set up the world with multiple languages, obviously). The way I do this, in case you wonder, is to emphasize certain letters and remove other letters; or to base all the words on terms from my handle book on Malaysian mammals; or whatever.

I signed up late, so I wasn’t assigned to any particular panel up front. However, I went and inquired of the very busy con staff and wound up participating in a panel on ecology in fantasy. This was a fun topic, especially with its emphasis on fantasy rather than SF! The other panelists were James Morrow, Julie Czerneda, and Geoff Hart. Julie and I have such similar backgrounds, it’s funny! I definitely need to try some of her SF. Anyway, we discussed how getting background details right (wheat in warmer areas, barley and buckwheat in cold areas) can make the fantasy world feel like it has more depth and more reality. But I think we all agreed that the story takes priority over scientific plausibility in books such as Naomi Novik’s TEMARAIRE series (you can’t possibly raise enough cows to feed the dragons in Britain, and as for raising elephants in Africa, forget it!). Later I went to a panel on dragons and Naomi Novik said the same thing when the question came up there.

The most interesting comment was made by a gentleman in the audience, I think possibly Fred Lerner himself (one of the editors of the SILVERLOCK COMPANION), about how different novels can be that are all called “fantasy” — ie, SILVERLOCK vs TEMERAIRE vs whatever. I agreed quite vehemently — it would be ridiculous to expect a book like SILVERLOCK, founded on literary allusions, to have the same kind of ecological foundation as a more standard fantasy. Here’s where you really have to agree to treat fantasy as a marketing category rather than a real category that has anything to do with what the book is *like,* because there’s just no comparison.

Okay, let’s see. I did attend various other panels — this and that — I thought all of them were well moderated and the panelists all did a good job. I took notes on how best to moderate panels because I’m supposed to moderate one on fairy tales this coming weekend.

I went to various readings — Sharon Shinn’s (she read from her first TURNING SEASON) and Mary Robinette Kowal’s (she read from a new standalone that has to do with mediums getting reports from the front from soldiers who have just died; that’s certainly a different concept for her!) and actually quite a few others. Oh, I thought L. Jagi Lamplighter’s reading from a new book of hers was good. I’m afraid I didn’t get the title of the book, but on the other hand who cares? I’ll just try any title of hers that looks intriguing. I took lots of notes on authors and books, but I don’t have them with me, sorry. I can see my TBR pile is going to expand, though.

I did meet my agent — only the second time Caitlin and I have met in person — and my new Saga editor, Navah. Caitlin and I got to talk about my current projects and, you know, tactical issues about how to handle things. Navah is enthusiastic and energetic and should be a great choice to help make Saga a successful imprint. I got to meet various other saga authors and staff, too, and I must say, the dinner conversation on Thursday was . . . unique. It involved frog, uh, reproduction. Because one of the other Saga authors was involved in some kind of captive breeding program, see. Anyway, Saga’s doing a great job of presenting its upcoming releases. Check this out, for example.

The hotel was totally beautiful and wonderful, btw. It was the Marriott Residence Inn Arlington Capital View Hotel, in case you’re interested. Full kitchen (including a card you could fill out to cause groceries to appear). Full sized fridge, cooktop, dishwasher, everything. Totally wasted on me, alas. They actually had a rooftop garden above the the fourth floor so that the view of the roof was quite attractive. That’s certainly attending to details! Wonderful staff. Too bad I didn’t spend all that much time in the hotel, because it sure was great.

Anyway, yeah, a good convention all around, and even the airports on either end were pretty easy to navigate. Biggest problem: cramming books into my carry-on bag. I got them all in, barely!