So, Shannon Hale’s THE GOOSE GIRL. 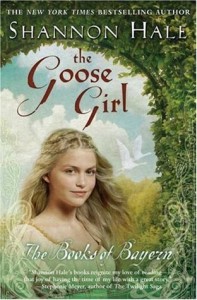 This was recommended to me by any number of people. I just finished listening to it last night. And I liked it. I really did. But.

The thing is, Hale’s story keeps closely to the original Brothers Grimm fairy tale. This plot requires a somewhat helpless heroine, which would be a problem to overcome right there. But then where there are departures from the original plot, they make the “helpless heroine” problem worse, not better.

A small but very important difference is that in the original fairy tale, when the lady-in-waiting forces the princess to switch places with her, the princess actually takes an oath not to tell anybody the truth. In Hale’s version, the princess (Anidori-Kiladra Talianna Isilee, love the name!!!) doesn’t take such an oath, and so when she vacillates and hesitates and wavers and never tells the king what happened even though she has several difference chances to do so, it is hard to excuse her.

Yes, Ani is shy and tongue-tied. We get that. That is well established beforehand. Even so, when push comes to shove and she’s right there in front of the king and she looses her nerve, I couldn’t help but feel like, Really? Are you serious? And then she spends about a year not doing anything effective. She doesn’t save her horse Falada — which is true to the fairy tale, but really? You let your enemies kill your horse? Seriously? She runs away, she is saved by strangers, she runs away again and hides and is caught and is saved again by strangers and in all this time she does nothing whatsoever to foil the bad guys (other than hide and survive). She finds out her maid, the false princess, is planning to start a war and destroy her home country in order to cover up her treachery, and does absolutely nothing about this for months — months! — while her enemy’s plans go forward.

It’s true that when she does eventually tell the king the truth, naturally at the very last moment, he doesn’t believe her. But that requires the king to be a total idiot, so much so that my suspension of disbelief stumbled hard. He is not presented earlier in the story as a fool, so it seem obvious that if Ani had told him the truth right at the beginning, he would have investigated — just her hair would have been plenty to require an investigation! — proof would in fact have been easy to come by, and poof, the story would be much shorter and less tense. Her horse wouldn’t have been killed, her enemies would have been defeated, and everybody would have lived happily ever after with no need for geese.

I did have other problems with the story, like why include the animal speaking anyway since that was never important? What about her mother’s handkerchief? But basically I was bothered by the Ani’s helplessness.

I have had this exact problem with other stories that I ought to have loved. The one that comes to mind is another fairy tale retelling: WILDWOOD DANCING by Juliet Marillier, an author I love, btw. 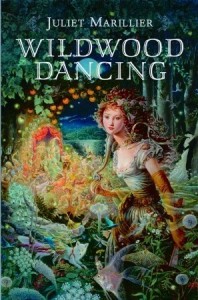 I fell so in love with Marillier’s writing in DAUGHTER OF THE FOREST, which is a very beautiful retelling of The Seven Swans. I loved the sequels, too. But WILDWOOD DANCING (The Twelve Dancing Princesses) was ruined for me by the complete ineffectual handwringing helplessness of the protagonist, Jena. When Jena’s cousin Cezar begins to take over everything Jena loves, no one but Jena sees what he’s doing and where it will lead. Jena sees all this clearly, and does nothing at all to stop him. For months and months, she frets and worries and agonizes and completely fails to do anything whatsoever that is in any way useful.

Of course the reader knows that at the end, Jena will suddenly step up and do something heroic. But three hundred and fifty pages of helpless inefficacy is so terribly, terribly frustrating to read about. If you’re the protagonist, then it’s your job to to do something clever to foil the bad guys. Then other stuff goes wrong and gives you another problem to solve. But it is not okay to just stand there and bewail whatever evil is happening right before your eyes and do nothing to stop it.

I mean, can you imagine Miles Vorkosigan just sitting there for months while the bad guys stomp around doing anything they want and having everything their way? It is to laugh, right?

Is it possible that some readers feel that passivity and helplessness can be attractive and sympathetic? In SFF, ineffectuality seems to me to be strictly a thing for the occasional female protagonist. Outside SFF, I can think of passive male protagonists. I think the romantic antihero as exemplified by Young Werther is passive and helpless in a very similar way — and even more frustrating to read about without the SFF setting.

Anyway, SFF or not, I’m pretty sure there is nothing at all a writer can do to make me like an ineffectual protagonist.

4 thoughts on “Things that just don’t work for me: ineffectual protagonists”