Recently I said that THE THOUSAND NAMES by Django Wexler is a bit gritty, but less so than Scott Lynch’s books; and a bit dark, but less so than Brent Weeks’ books. And then I thought: I definitely define “gritty” and “dark” differently, but I’m not sure how broad the agreement is about what each term comprises. So then I googled “gritty fantasy” and decided that my definition is perhaps idiosyncratic, because the first several definitions I found did not seem right to me.

I don’t agree that “gritty” fantasy is “painted in shades of gray, realistic, with more gory violence and sex.” That, to me, is probably dark fantasy. Or, if the author defines realistic as “everything starts off shitty and then gets worse,” and treats rape as the dominant conception of sex in that world, then it’s probably grimdark.

Dark fantasy: There may not be a clear good guy vs bad guy type of arrangement, because the characters you’re supposed to root for are not that good and morality is painted as this relative concept. You would probably not find that the word “integrity” leaps to your mind as the defining characteristic of any character, but you do find yourself rooting for the protagonist to succeed, even if he is an assassin, as in Brent Weeks’ Nightangel trilogy. 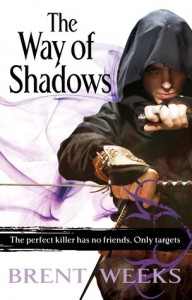 Violence is probably widespread, detailed and explicit, but there is probably an aim to it as the protagonists are probably trying to achieve a worthwhile goal. Rape may occur, but is certainly not presented as the typical or desirable sort of sexual encounter. The protagonist is probably in love with someone and this gives rise to a positive relationship that strengthens both people involved.

In gritty fantasy, on the other hand, we have, uh, grit. The grime is added back into the world.

Streets are filthy, and we get a good look at the sewage. Beggars have rotting fingers, and we get to smell the putrification. Poor families may sell a child to slavers, and may not feel especially bad about the necessity, either.

But this doesn’t mean that the author doesn’t show us the beauty in the world, too. The grittiness is another layer added to the world, a layer that is more or less elided in high fantasy.

Or so it seems to me.

So Grimdark = unrealistically grim and dark; elides beauty, honor, love, and any sense of the ineffable; both protagonists and the world wind up worse off at the end; also probably gritty.

Dark = not unrealistically grim; includes the beautiful as well as the horrible — see Locke Lamora’s relationship with Jean, for example; if the protagonist is worse off at the end, it’s because there’s a cliffhanger and another book is expected, because in the end the story will reach a satisfying conclusion. May or may not be gritty, because it’s perfectly possible for a story to be dark high fantasy.

Gritty = the grimy details of the world are shown, but the story may either be grimdark fantasy, dark fantasy, or adventure fantasy. You can’t tell just from the word “gritty.”

Now, if only everyone would adopt my definitions, think how much easier it would be for me to find the books I would most like to read! None of this conflating “gritty” and “dark” and “grimdark.” We could have a simple letter code, like moving ratings! Tuck a little GD or DK or GRT or HF in the corner of the cover. Wouldn’t that be handy! Clear up all that confusion in a heartbeat!

(Hah hah hah, no, just kidding, can you imagine the arguments about what rating any particular book deserved?)