So, I was at Archon this past weekend. That’s a quite small SFF convention right outside St Louis, so it’s an hour and a half drive for me, so I usually go. One of the things that Archon is really known for is a wonderful masquerade, btw, which unfortunately I did not get a chance to see this year. (This really was unfortunate, as I hear the masquerade was exceptional this year.)

Anyway, I had a chance to chat with various local authors: 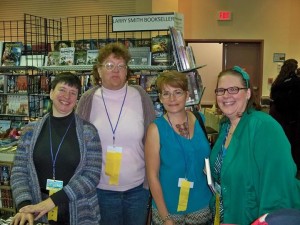 This is me (obviously); Marella Sands, who did my favorite panel of the weekend on “Good and Evil in The Lord of the Rings” and who has written a couple of fantasies with an anthropological focus; Rett McPherson, who writes mysteries; and Kasey MacKenzie, who has written several books in a UF series. Her first books got a starred review from Publisher’s Weekly, incidentally.

I haven’t read any books by any of these women, but I’m pretty likely to after meeting them all. They all seem like great people and did I mention I especially loved that Tolkien panel?

Anyway, I enjoyed talking to everyone. Plus, I was on a panel on writing YA, pretty standard but it’s always a good topic and always seems to be of general interest. I mean, generally that kind of panel focuses on what sets YA apart from adult and that is always a good way to get a discussion going.

And I was on an interesting panel on “changing voices in SF,” which was good, but hard to summarize.

And one more on “person and voice,” which was especially good because I have strong opinions on why first person is harder than third person and a writer just has to be better to pull that off, plus examples of especially good first person are easy to think of. Fundamentally, I think it’s important to just notice especially well-done and rather awkwardly done examples of first and third person and figure out what’s going on that makes them work or not work. Oh, and I used Judith Merkle Riley as an example of complex point-of-view that really works, though naturally I couldn’t remember her name — why does that always happen? — but at least I remembered the title In Pursuit of the Green Lion so I could point attendees to this great series. (My review here, btw)

So, that was all good.

Tamora Pierce was the guest of honor this year. And I bumped into her because I was chatting with a few people outside the room where she was going to have a panel. And she looked at my nametag, looked at me, and said, “I’m a big fan of your books.”

Okay! After a stunned pause, I asked rather cautiously, “Um, which one have you read?”

And she said, “All of them,” and then we had a brief conversation about Lady Tehre from BURNING SANDS and, well, you can imagine. Luckily I was able to sound really sincere as I told her how much I loved the BEKA COOPER trilogy, how wonderfully she used the journal style for these books, how great the slang was at lending the whole world a sense of depth and reality, etc.

I’ve read all the books set in the Alanna world, and I enjoyed them, but truly the Beka Cooper ones are my favorites by a mile. In fact, I went home and re-read the first Beka Cooper story that night. And yes, it’s just as good as I remembered.

So naturally the next day I picked up her latest book in the dealer’s room. I don’t know anything about it except it’s by Tamora Pierce, it’s probably military fantasy (judging by the name), and it was an appropriate book to ask her to sign.

So then the next day I made sure I had a chance to ask her to sign it for me: 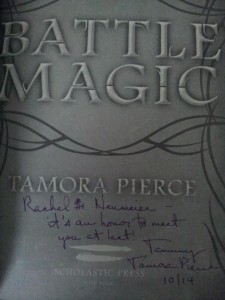 Can you read that?

Wow. How cool is that?

8 thoughts on “Archon: Good, with sparkling moments of wonderful”