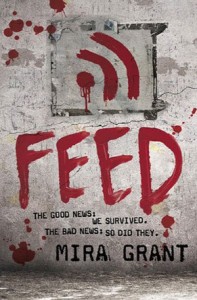 This book is beautifully written, with invisible prose and a compelling narrative voice. The overall plot has major believability issues and I had problems with aspects of the characterization, but the actual writing is very good indeed. The characters are driven forward by the action and act (mostly) in what seem to be believable, realistic ways. Well, realistic and believable if you discount the Massive Conspiracy and a few other important details — I did say I had believability issues with the plot. Also, FEED is ambitious in how it tries to combine current political and technological trends with the Zombie Apocalypse. I thought it deserved its Hugo nomination. 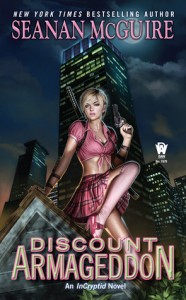 This book has writing which is often clunky. We frequently get things like “The question preying on their minds” when referring to a question that “they” learned about only 30 seconds ago. Does that phrase not mean what I think it means? The narrative voice — also, like FEED, a first-person voice — tries for snarky but comes across as both whiny and predictable. The characters do eyerollingly stupid things that make no sense at all, even in the world as established. The worldbuilding and plot also comes across as thoroughly predictable, derivative and boring.

What I don’t know is whether the difference in writing is as extreme as it seemed to me, because I read FEED, but I listened to the audio version of DISCOUNT ARMAGEDDON. Listening is slow, so maybe I noticed clunkiness that I would have read across in print? I didn’t care for the narrator’s voice, so maybe that is why I thought the protagonist seemed whiny?

I imagine the author wrote this UF to relax and have fun, but . . . the writing seemed so different! And nothing like as good. Plus, I stand by derivative and predictable. I swear, I don’t think there were more than ten words in the whole book that I didn’t see coming. Okay, the mice were cute. But basically everything about this story seemed completely predictable — and I’m hardly that well-read in UF in general.

Okay, now what I wonder is: Have you seen other authors who seem to have entirely different personalities and skill levels when they write in different series? Because I don’t think I’ve ever seen that before. I had no trouble recognizing that Barbara Hamilton was really Barbara Hambly. Her phrasing and characterization are so recognizable! I can tell CJ Cherryh at a glance, whether she’s writing her FOREIGNER series or high fantasy. But this time? This time I can’t believe these books were written by the same person, even though I know they were.