I know, I sure vanished there over this past weekend! I was showing Thursday, Friday, Saturday, and Sunday, so lots of driving and lots of making my girls look pretty, but zero access to the internet. And then no work on Monday, so there you go.

Kenya still isn’t a champion, alas. After a few really annoying weekends of getting nothing but reserve + compliments (“I love your bitch, it was a really tough decision” is nice to hear, I guess, but REALLY? JUST GIVE HER WINNERS), she finally got Winners three days in a row, but Honey won on Sunday. So now Kenya needs exactly one single point to finish her championship, while Honey needs three single points. Incidentally, this is strictly a head vs. body question. The first three judge prioritized head and glamor and gave the win to Kenya; Sunday’s judge prioritized structure and movement and handed the win to Honey. I agree with her, but it’s too bad I didn’t just pull Honey on the last day and throw the point to Kenya. Not that there was a guarantee someone else’s girl wouldn’t win, but I thought my two girls were way superior to the competition at this show.

Well, two more show weekends coming up this month. Hopefully one or both of the girls will finish their championships before the month is out! Especially Kenya! I am hoping for small shows with tiny entries since I just need single points, but you just never know what you’ll see.

I’ve noticed a surprising number of spectators at recent shows, even though some of the shows charge a (nominal) fee for spectators. I like to chat about my girls and welcome kids petting them, unless we’re just about to go in the ring, but this makes me want to provide a visual aid.

This is an American Cocker Spaniel: 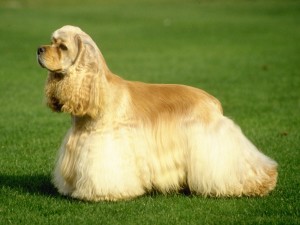 This is Kenya, back when she was a slim, svelte graduate puppy (she is plumper now, like most of us): 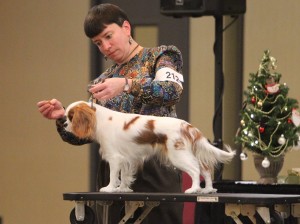 If you are now asking, “But why is she saying “American” Cocker? Is there any other kind?” Then yes, there is also the English Cocker Spaniel, which has a more old-fashioned setter-type of head, is larger, and comes in different colors: 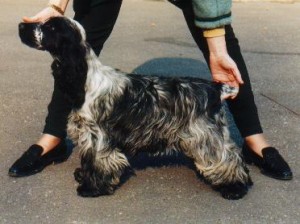 There are actually a dozen kinds of spaniels, and hey, now that I’ve gotten started, I though of course you would naturally all enjoy a pictorial guide to what we shall call the normal spaniel breeds you see at shows in America. (There are other breeds, like the Blue Picardy Spaniel, but not only is it not AKC recognized, but also I’ve never ever seen one, so I would say it’s not a normal spaniel breed.)

The smallest spaniel: The English Toy Spaniel. As you see, it’s got a pug type of head. These are smaller than Cavaliers, built more square, with docked tails and low-set ears. 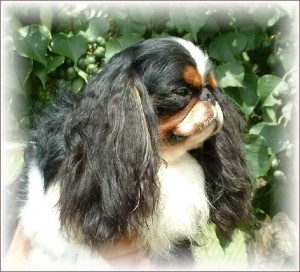 Then the Cavalier is the second smallest spaniel breed, then the American Cocker is the smallest non-toy spaniel — American Cockers are the smallest breed you generally see in the Sporting group, with English Cockers the second-smallest Sporting breed. But though you seldom see them, Boykin spaniels and Field spaniels are about the same size. Both are AKC recognized. To me Field spaniels look wrong, simply because I’m more used to Cockers. They look too long in the body and their head looks strange. They have way less coat, which would be a plus. I happen to like Boykin spaniels. They’re my second-favorite spaniel based on breed descriptions. They’re regionally popular, so you supposedly see a lot of them in Carolina. (I never have).

Field spaniels can be black or brown. Boykin spaniels are always brown. 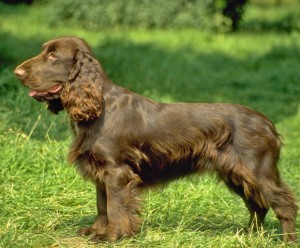 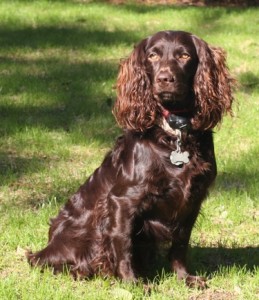 The other spaniel that’s about the same size is the American Water Spaniel, which you couldn’t possibly mistake for any other breed because it has a curly coat: 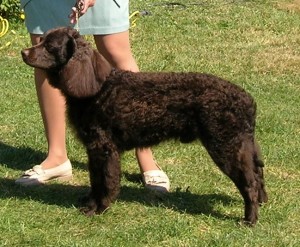 Okay, moving up in size, you get the much more familiar English Springer spaniel and the vastly less common Welsh Springer. You can see the Welsh has a lot less coat. It’s also always that red-brown color, never the dark brown of the English Springers. The English Springers are showy, flashy, glamorous dogs that do a lot of winning and are very competitive. They’ve had some very famous winners at Westminster in the recent past. The Welshies are not as flashy and have never hit the bigtime, but they have much easier coats to maintain and I hear they have very nice personalities as a rule. I’m not sure I’ve ever actually met one, though I’ve seen them from time to time. 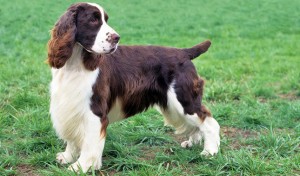 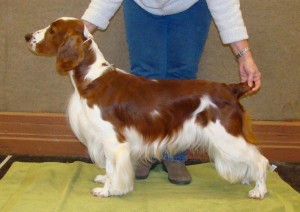 Then you get the big, heavy spaniels,the Sussex and the Clumber, bred to shove through heavy cover at a steady, deliberate pace. I’ve read they were meant to hunt with elderly gentlemen who didn’t want to dash around at top speed. They sure look like spaniels crossed with bassets, don’t they? The Sussex are always that color (golden liver). I like the color, but the heavy lowslung look doesn’t really do it for me. You see some very fine Clumbers at shows; there was one right next to my grooming spot a week or two ago, being shown by a professional handler. He was a good looking dog, even though it’s not the breed for me. Very patient, too. Lots of time spent on the table, having cornstarch brushed through his furnishings and out again (to whiten his coat). 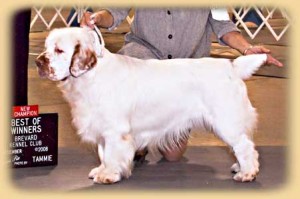 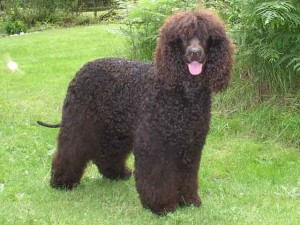 There, how many is that? A dozen breeds? I think that’s all the breeds of AKC-recognized spaniels. Basically to me they all look quite distinctive. To me, a Cavalier looks only a little bit more like a Cocker than it looks like a German Shepherd.