I read this book recently because my computer suddenly crashed and hey, look, all of a sudden I had free time. (My younger brother the computer god listened to me explain what had happened, and told me to take the battery out and put it back in, and thus I luckily didn’t have nearly as much free time as I’d feared. But I had already started THIEVES by then.)

Anyway, I’m really enjoying the KEHERA revision, so I was able to work on that and read this at the same time. Well, not actually QUITE the same time, obviously, but I could put THIEVES down to work on KEHERA without going nuts.

Writing Update: I’ve cut 40 pages! Woo hoo! This is a long book, so I’m not sorry to see some pages vanish. They are stored in a separate file in case I want them back, but I suspect they are gone for good. I am also tweaking here and there, and the beginning is completely different as what used to be the third chapter now opens the book. There’s lots to do, but I am definitely making progress.

Anyway: THE REPUBLIC OF THIEVES

So, here’s Lynch’s series so far: 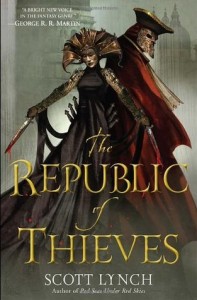 It’s been a while since I read THE LIES OF LOCKE LAMORA – I read it the year it came out, I think, which as you see was a while ago. Then the second book came out promptly; I wonder what the hold up was for this third book?

This is relevant because this is one series where I don’t really feel like going back and re-reading the earlier books before starting the newest. I’m not sure why I didn’t want to re-read this series. It’s not because I don’t like the earlier books enough to re-read them; I do like them. A lot. Maybe because Lynch is writing such dense, long stories. Maybe because so much goes wrong in LIES and then even more stuff goes wrong in RED SEAS and it’s painful to watch Locke and Jean get basically crushed. If you do read this trilogy, you will definitely want THIEVES on hand so you can go on from RED SEAS right away. I will say that the end of THIEVES leaves everyone in a better position than at the end of RED SEAS, not that that’s hard.

I will also say: you don’t have to re-read the first two (or read them at all) to enjoy this book. Lynch did clever things with THIEVES so it works on its own.

Now, if you haven’t yet read this trilogy, I should say that LIES is fairly self-contained, but RED SEAS ends on a cliffhanger. That cliffhanger is resolved early in THIEVES, which is again fairly self-contained, but with threads left dangling for what is plainly going to be a fourth book. I really do not know how many stories Lynch has planned in this world, but I can definitely say that the series can’t be ending with THIEVES. But THIEVES does give the reader enough closure that you don’t really have to worry about it.

The characters: Locke, Jean, and Sabetha are the three main characters in THIEVES. Locke has been the primary pov protagonist all along, of course, and he still is here. The pov is a fairly close third person and is nearly always from Locke’s pov. Jean is Locke’s close friend and ally. Sabetha is Locke’s love interest, who makes it totally clear that she is actually her own person and not The Love Interest and that her world does not revolve around Locke. I think readers are going to love Sabetha. I mostly did, except that she does have a definite tendency to fly off the handle and rush away when confronted with unsettling new explanations about, uh, things. This is not a tendency I much admire. I actually like Jean’s steadfast loyalty quite a bit more than Sabetha’s volatility. I like Locke nearly all the time, especially his absolute refusal to allow Sabetha to put down Jean even though he’s so obsessed with winning her heart. All three characters are clever, witty, competent and fairly amoral but also basically decent people. They may be thieves, but they are not antiheroes.

The plot: THIEVES is a caper novel. Two caper novels, actually: the one set in the past, which concerns Locke, Jean, Sabetha, and two other young people who get roped into joining a theatrical troop putting on a play called The Republic of Thieves; and the one set in the present, which concerns Locke and Jean competing with Sabetha to see which rival political party they can set up to win an election in a different city-state. (Yes, really.) Both capers are clever. Both involve serious obstacles, including obstacles I didn’t see coming at all; both involve lots of quick thinking and action.

I enjoyed both stories very much – about equally, in fact – which is hard to pull off; I don’t need to mention how much weaker the book would have been if one of the two plotlines had been substantially less interesting than the other. On the other hand, I can’t really say that the two stories seemed to play off each other; to me, they might as well have been sorted out and published separately. On the other other hand, I might be missing something subtle. I was too much engaged in the reading experience to be very analytical.

The world: Lynch can really layer depth and texture into his world. This trilogy is fairly gritty and somewhat dark, but far from grimdark – more like Brent Weeks than Joe Abercrombe, if that orients you at all. We get broad sketches to introduce a city, then tons of details layered in as we go.

Lashain was famous as a city where anything could be bought and anything could be left behind. By the grace of the region, the city’s highest and thinnest order of nobility, just about anyone with cash in hand and enough of a pulse to maintain semiconsciousness could have their blood transmuted to a reasonable facsimile of blue.

From every corner of the Therin world they came – merchants and criminals, mercenary captains and pirates, gamblers and adventurers and exiles. As commoners they entered the chrysalis of a counting house, shed vast quantities of precious metal, and as newborn peer of Lashain they emerged into daylight.

Because of the novelty of this purchased respectability to those who brokered it for themselves, Lashain was the most violently manners-conscious city Jean Tannen had ever visited. Lacking centuries of aristocratic descent to assure them of their worth, the neophytes of Lashain overcompensated with ceremony.

That’s the broad sketch; then the details pile up over that. I must say, I’m glad I don’t live in this world. I wouldn’t want to visit. But depth and texture ? Oh, yes. Every city is different from every other city; the people who live in those cities are distinctive; you can just feel the history of the world stretching waaaay back into the distant unrevealed past.

The writing: Okay, listen to this tidbit from THIEVES, which made me laugh:

“I require a vacation from all of you, but I’m not leaving Camorr. You five will be making a journey to Espara. I’ve arranged work there to keep you busy for several months.”

The room was quiet.

“I thought that might be your response. Look, I tucked a pin into my jacket for this very moment.” Chains drew a silver pin from one of his lapels and tossed it into the air. It hit the floor with the faintest chiming clatter.

“One of those expressions I’ve always wanted to put to the test,” said Chains.

Lynch has a deft hand with humor. There are so many great tidbits, I could hardly bookmark them all! I think I did laugh out loud when Sabetha whispers to Locke, late in the book, “I keep wondering, are we smarter than that woman’s chicken?”

Okay, trust me, in context, that is a lol line.

In one important way, I think Lynch was especially clever to alternate sections from the past, starting when Locke was just a kid but mostly from a period when he was about sixteen, with sections taking place in the present, when Locke and the others are in their twenties. This is what works so brilliantly if, like me, you read the first couple books some time ago and don’t really want to re-read them just now; because of the scenes set in the past, the reader really doesn’t have to remember much about the other two books to get oriented in this one. I think this book would also work fine if you haven’t read the other two at all — though I think it works better if you have.

Long and dense but lively and fast-paced, these are great novels. I think I like this one the best of the three. I’m definitely on board for the next book, whenever it appears.

2 thoughts on “Recent Reading: THE REPUBLIC OF THIEVES by Scott Lynch”