I actually did read some new-to-me books recently, especially during the Kansas City trip — I got into Melina Marchetta’s backlist: JELLICOE ROAD and SAVING FRANCESCA and THE PIPER’S SON. But I’m not sure yet what to say about them. They are all intense YA contemporaries and it took me a while to get into each one and I ended up loving each one, but, well, still putting my thoughts in order. Maybe over the weekend I will try to write something coherent about them.

Also, I must admit I’ve been re-reading the CHANUR series. Stealing time from actual projects with deadlines! But I couldn’t help it. I’m halfway through the third one. Yeah, you should definitely, but definitely, not start CHANUR’S VENTURE unless you have both THE KIF STRIKE BACK and CHANUR’S HOMECOMING in your possession. This is just one story chopped up into three random sections. As pointed out in the comments of the Chanur post, CHANUR’S HOMECOMING is not available in ebook although the others are, which is ridiculous and will hopefully soon be rectified, but if I were you and wanted these in ebook form, I would simply pick that one up used in paper and complete the ebook set later.

Anyway, thinking of CJ Cherryh leads me to John Varley. Most, maybe all of the authors who are Cherryh’s true contemporaries (started writing about the same time, were well-known at least for a time) are even more neglected today than she is, and imo Varley is the one who most ought to be dragged back into the light of day. Some of his work is like, I don’t know, a cross between Cherryh herself and Kim Stanley Robinson. Hah, well, sort of! He deals with big-scale stuff, fairly big scale anyway, but develops his characters a lot more than Robinson and also comes up with pretty cool nonhuman species.

Varley is still writing, but some of his more recent titles seem to be political thrillers or something, and I am not too interested in that kind of thing, so I haven’t read them. But Varley is a very good writer. He was already writing, in the late seventies and early eighties, SF books that are a perfect fit for today’s SF audience. His exploration of gender was especially cutting edge; I mean, his treatment of gender and identity still looks cutting edge today, which is remarkable. Here I’m talking about his short fiction mainly, but he did a lot with gender in his novels, too. And not in a ridiculously preachy This Is My Issue way, either; it was just something he worked with in his fiction.

Now, I actually have a good many of Varley’s short stories in various collections, but you all know I prefer longer fiction, and my hands-down favorite of his longer works is his Gaea trilogy. 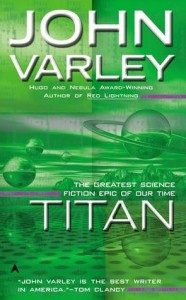 This horribly boring cover is by no means an asset, but whatever, at least it’s not too off-putting. It is hard to imagine just what you would put on the cover, actually; using a view of Saturn gives you an extremely misleading idea of the story — this is not Spaceship Adventure — yet putting almost anything more relevant on the cover would give so much away. I’m sure it was a dilemma, but I would probably have picked something a bit more interesting if it were me.

So, the story: Cirocco Jones – a great name, I think – and her small crew are exploring the moons of Saturn and find an extra, too small to have been detected previously. Only this small moon turns out to be an artificial structure maintained by an entity called Gaea. Um, they don’t find out about Gaea right away, but I don’t think it will interfere with the reading experience if you know that part up front. Believe me, I’m leaving out *everything*, really. Anyway, the little moon contains an atmosphere on the inside, and thus its own extraordinary ecosystems and many different species living in them, though I’m sure Cirocco and her people would have been happier finding this out some other way than getting trapped and pulled into the living moon and, oh, call it extruded into the inside environment. So this is first a story about getting stranded in and then exploring a new world, and then it gets way, way more complicated from there. WAY more complicated, seriously.

As far as I’m concerned the story really starts about forty pages in, once the crew is inside Gaea. Here is a snippet from that part:

The pool was fed by a two-meter fall from a rocky stream which wound through a little valley. The huge trees arched overhead, completely blocking her view of the sky. She stood on a rock near the edge of the pool, trying to judge its depth, thinking about jumping in.

Thinking about it was all she did. The water was clear, but there was no telling what might be in it. She jumped over the ridge which produced the waterfall. It was easy in the one-quarter gee. A short walk brought her to a sandy beach.

The water was warm, sweet, and bubbly, and easily the best thing she had ever tasted. She drank all she wanted, then squatted and scrubbed with sand, keeping an eye open. Watering holes were places for caution. When she was through she felt reasonably human for the first time since awakening. She sat on the wet sand and let her feet trail in the water.

It was cooler than the air or the ground, but still felt surprisingly warm for what looked to be a glacier-fed mountain stream. Then she realized that would make sense if the heat source in Themis was as they deduced: from below. The sunlight at Saturn’s orbit wouldn’t provide much ground heating. But the triangular fins must be below her now, and they were probably designed to capture and store solar heat. She envisioned huge subterranean rivers of hot water running a few hundred meters underground.

Moving on seemed to be the next order of business, but which way? Straight ahead could be ruled out. Across the stream the land began to rise again. Downstream should be easiest, and should bring her to flatlands soon.

She looked at the tangle of metal junk she had been carrying all . . . what was it? Afternoon? Morning? Time could not be measured that way in here. It was possible only to speak of elapsed time, and she had no idea how much had gone by.

The helmet ring was still in her hand. Now her brow furrowed as she looked more closely.

Her suit had once contained a radio. Of course it was not possible that it had come through the ordeal intact, but just for the hell of it she hunted for and found the remains. There was a tiny battery, and what was left of a switch, turned on. That ended that. Most of the radio had been silicon chips and metal, so there had been some faint hope.

She looked again. Where was the speaker? It should be a little metal horn, the remains of a headset unit. She found it, and lifted it to her ear.

“Gaby!” She was on her feet, shouting, but the familiar voice kept counting, oblivious. Cirocco knelt on the rock and arrayed the remains of her helmet on it with fingers that trembled, holding the speaker to one ear while pawing through the components. She found the pinhead throat mike. . . .

Quite a situation! This is a great setup, of course: New world! Stranded! Must explore and meet challenges and discover what’s really going on, which is not anything anybody could possibly predict. I look at this opening and it’s just amazing to know where this story is actually going to take us; you aren’t going to see it coming from the initial set-up. Even less so than, say, stepping through a portal into a new world and finding psychic space ninjas, just for example.

Anyway, I’ve read this trilogy lots of times and will undoubtedly read it lots more. I’d love to see it back in the lexicon of must-read SFF.