And, since I’m taking a few days off before getting into the revision, here’s the first book I picked up off my TBR shelves.

The streets of Seville are the size of sidewalks, and there are alleys leaking off from the streets. In the back of the cab, where I sit by myself, I watch the past rushing by. I roll the smeary window down, stick out my arm. I run one finger against the crumble-down of walls. Touch them for you: Hello, Seville. 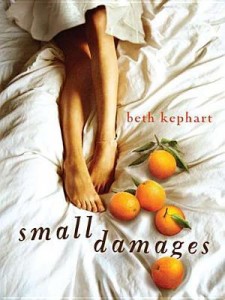 This book was not on any of my recent “Top ten titles I must read as soon as possible” lists. Even so, it was the one I reached for. This always happens to me: The decision of what to read depends so much on my mood at the particular moment, and what I read last, and what I’ve been working on myself, and what my next project is going to be, and I don’t know. I guess I must have felt like reading an emotionally intense contemporary YA, because as I say, this is the one I picked up.

So, the cover. Pretty, isn’t it? That’s the sort of thing that makes me edge a book upward on the want-to-read shelves. But this time I think the big thing was: I have been working on secondary-world fantasies all year, and recently re-reading some of Brust’s Taltos series which are also secondary-world, and all of that served to push me away from fantasy and toward contemporary when I reached for a book. So if you read mainly fantasy, this one might not have been front-and-center on your radar. I don’t remember any more where I heard about this title. Possibly from one of you; I don’t know.

It’s senior year, and the future should be right within reach. But for Kenzie – bright, ambitious, in love with Yale-bound Kevin – the future has been rearranged. She’s pregnant, and she’s determined not to end her pregnancy. Her mother and Kevin refuse to understand. Sent off to an old cortijo in Spain, Kenzie must find a way to endure until her baby is safe in an adoptive couple’s hands.

Yes, I suppose. Also, not really. This story is really about the broader theme of growing up and deciding, well, I suppose it’s about deciding who it is that is going to make the important decisions about how you live your life. The pregnancy is important, and I love how Kenzie has a running monologue with her baby, and how she thinks of her – a spine like a row of pearls and all that. But the theme running through this book is about making decisions, and the lingering consequences of decisions, and taking control of your life. And about what makes family; that, too.

What it reminds me of is Nelson’s THE SKY IS EVERYWHERE, but Kephart’s SMALL DAMAGES doesn’t really reach that level of intensity or complexity or poetry. Still, the resemblance is there, I think:

It’s an uphill place, then downhill. It folds and bends. It’s white like someone tipped a can of bleach, like the sun has destroyed all other colors, and then it is the color o concrete or of lemons or of sky; it’s ochre brick in fly-away towers – everything skinny, all of it bright.

You see. Beautiful prose. This is a book I particularly suggest if you love setting, because Seville is beautifully drawn.

The situations in the two stories are quite different, of course. SKY is about grief and recovery. In SMALL DAMAGES, we get the dilemma of a pregnant teenager, and here Kephart stepped back from some serious aspects of the dilemma that most girls would face, because Kenzie is from a sufficiently privileged background that she could keep the baby, if she was determined to. Otherwise, hiding Kenzie’s delicate condition by sending her to Spain wouldn’t have been possible, right? Also, I think Kephart framed other aspects of this story in ways that gave Kenzie the opportunity to make her own decisions without being seriously constrained by, well, practicality. Compare that with Sarah Addison Allen’s THE GIRL WHO CHASED THE MOON, where Julia really had no choice about whether to keep her baby. It’s not like that for Kenzie, She doesn’t have any support from her mother, but she does from the people she’s staying with in Spain. This allows her a purer focus on making her own decisions, but the flip side of that is, I think, a loss of complexity and intensity.

In something of the same way, Kenzie’s mother – seen only in tiny flashbacks – is almost but not quite completely one dimensional. This story focuses so tightly on Kenzie that it doesn’t leave much room to develop the relationship there, and in fact Kenzie is so focused on herself that I found myself in the odd position of being quite a bit more sympathetic toward her mother than she ever is.

Of course, it’s tough to develop Kenzie’s mother since she and her mother are on different continents for the whole course of the story. We never get a chance to see them together. Still, we don’t get phone calls or letters, either. On the other hand, I must admit, the reader is indeed going to sympathize with Kenzie. There’s a world of difference between the complicated but basically sound relationship between, say, Cath and her father in FANGIRL vs what seems to be a thoroughly dysfunctional relationship between Kenzie and her mother in SMALL DAMAGES. I mean, check out these contrasting scenes:

Frankly, I think that’s one of the most perfect parental responses to a crisis ever.

“I can’t have her here,” my mother had told her friend Mari, over the phone. “I can’t let anybody see what she has done, who she’s become.” It was Mari who arranged for all this – Mari, who had married a Spaniard years ago and who knew someone somewhere wanting a child. . . .

“But what if I don’t like whoever it is who’s adopting my child?”

I mean, good God. One can see why Kenzie is not exactly close to her mother. She may be focused on herself, on her own problems, but at least she’s a teenager. What’s her mother’s excuse for this self-centered brutality? Still, I would have liked to see more development of that relationship. I kind of expected the mother to develop more complexity and she really didn’t, or hardly at all.

The real mother-figure in SMALL DAMAGES is the cook, Estela. We get a lot more of her background, in bits and pieces – living through Franco, ugh – and it’s Estela who pulls Kenzie out of herself, too. I think Kenzie is simply more able to be emphatic with someone who is not her own mother, a situation which is highly believable. In the end, this is a simple story, but beautifully told.