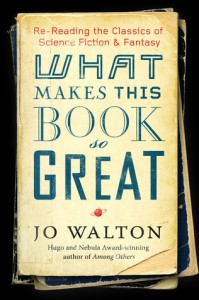 10 thoughts on “Recent Reading: What Makes This Book So Great by Jo Walton”