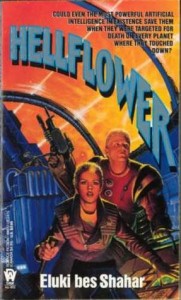 4 thoughts on “Past reads: HELLFLOWER by Eluki bes Shahar”