I am pretty sure I’ve mentioned this one before in several different contexts, but probably not lately. Let me mention it now, at somewhat greater length.

But first! What is it with covers for re-issued books? Once again, not a very appealing cover for the newer edition: 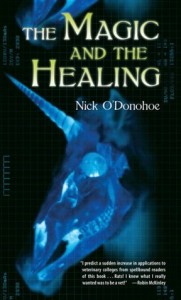 And once again, the original cover was far superior: 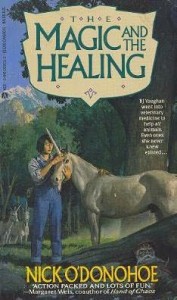 Hello, marketing departments? Who in the world would prefer the new cover? Do you really think that radiograph of a unicorn’s head even faintly evokes the story? I grant you, it is logically connected to the story, more or less, but it is also ugly and unappealing.

Weigh in, people: agree / disagree on this pair of covers? Am I wrong in thinking the marketing department did this cover redesign on Clueless Day?

THE MAGIC AND THE HEALING was first published in 1994, so 20 years ago. O’Donohoe has written a decent handful of books, including two sequels to this book; TOO TOO SOLID FLESH, a fairly ambitious Shakespeare thing that is a bit hard to describe, but if you’re into Hamlet you should check it out; and THE GNOMEWRENCH IN THE DWARFWORKS, a WWII home front story with, yes, gnomes and dwarfs.

I actually like all of his books that I’ve read, but THE MAGIC AND THE HEALING is my hands-down favorite. Like so many other excellent books, it hit the massive ocean of Available Titles and vanished with nary a trace, at least so far as I know. I never see it on lists of great books, but it seriously deserves to be pulled back into the light of day. There don’t appear to be ebook versions, unfortunately, but it is still available in print.

Do you happen to have a teenager around who reads fantasy and thinks she or he might like to be a veterinarian? Did you yourself ever think you might like to be a vet? For that matter, *are* you a vet? I loaned this book to my own vet; she loved it and gave it two thumbs up for the medical details.

My impression from an informal survey is that many many many girls and some boys at least toy with the idea of becoming a veterinarian. I know I did! Let me tell you, if you checked Yes for any of the above, you really must track down a copy of this book.

In Virginia, veterinary student BJ Vaughan cleans out her locker, about to give up on animal medicine forever.

We get more than unicorns in this book. We have centaurs, fauns, werewolves, and the occasional sheep, all with their own particular medical issues, not to mention their own social customs and sometimes scary personalities. We also have a splendid griffin, the very one that made me want to put griffins into a story of my own, a griffin who . . . okay, approaching spoilers, there, so never mind. But you will love the griffin. Really.

Anyway, as an additional rotation in veterinary school, Crossroads is hard to beat, though venturing into Crossroads does come with a certain amount of danger. Well, a lot of danger, actually, given the invading army and everything, but there we’re getting into spoilers again. Moving on, moving on.

So: BJ Vaughn is a great protagonist. She is intelligent, capable, and perceptive. In fact, I remember quite plainly how this book demonstrated to me the difference between intelligent, capable, perceptive characters and characters whom the author insists has those qualities, without actually providing evidence. When I first read this, I had just read something forgettable with a protagonist whom all the secondary characters treated as special for no obvious reason, so the contrast was dramatic. Actually, if you want a primer on How To Write Characters Who Really Are Unusually Perceptive, this book is a good choice.

We also have a large cast of excellent secondary characters, even aside from the Griffin and various centaurs and fauns and so forth. For example, Sugar Dobbs, the vet in charge of this peculiar rotation. Also Lee Anne, Dave, and Annie, BJ’s fellow students. I will note here, since it is unusual in modern fantasy, that these secondary characters are diverse in a broader sense than the one in which we use the term today: one is from a poor rural southern background and one is from a devout Christian background. Both are handled well and respectfully by the author and the story.

Although THE MAGIC AND THE HEALING is the first book of a trilogy, it can absolutely be read as a standalone; it closes beautifully. Though the two sequels are worth picking up if you like the first, in my opinion, this one is the strongest of the three. I am just positive you will enjoy this book if you appreciate strong, straightforward writing and you’re at all into veterinary medicine.

5 thoughts on “Another look into the past: THE MAGIC AND THE HEALING by Nick O’Donohoe”