Wow. I knew this was considered The Book when it comes to Thai food, but . . . wow. Somehow I wasn’t expecting a 630 pp tome. Very handsome volume, but not one to hold in one hand while lounging on the beach. Not that I do much lounging on beaches here in landlocked Missouri, but trust me on this, you are not going to hold this book in one hand under any circumstances, unless your hands are much stronger than mine. 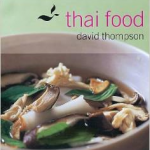 It’s a beautiful book, though, with heaps of beautiful pictures to accompany the recipes. But not only that! It also offers more than 100 pp on the history, culture, and geography of Thailand – not to forget the 30 pages or so devoted to rice – before we get even to ingredients, much less recipes.

For me, all this introductory material is a huge perk. This isn’t just a cookbook, it’s a resource for writing stories filled with the “flavor” of SE Asia. If I’d known all that stuff was in this book, I might have bought it sooner. Or not, since who knows when I will finally get around to writing a book with that kind of setting. Maybe as early as year after next, or maybe the year after that, hard to say, lots of projects coming along.

1 can curry paste, any variety (there are at least eight kinds at Global Foods) but I liked the Kiang Kua curry paste I used recently and hated the Mussaman curry paste I tried before that (chemically taste to the latter).
One onion, sliced
6 oz or so sliced chicken breast or pork, thinly sliced beef, or shrimp
1 can coconut milk (I like the Chaokoh brand)
Generous double handful fresh green beans or snow peas, tipped
Good splash fish sauce (I like the Golden Boy brand, which is mild)
Small splash fresh lime juice, if you have a lime handy
Cooked rice, jasmine if you care, or whatever kind of rice you have around.

Heat a bit of oil in a deep skillet. Add half the can of curry paste (freeze the rest; it’s wise to label it so you don’t mistake it for tomato paste a month later) and stir briskly or a minute or two. Add the onion and stir for five minutes or so. Add the sliced meat and stir until partly cooked. Add the coconut milk and bring to a simmer. Simmer five minutes or until the meat is about done. Add the green beans or snow peas and the fish sauce. Simmer until the vegetables are as tender as you like them. Turn off the heat and add a splash of lime juice (I was adding lime juice to blackberries to swirl into ice cream, so I had a lime conveniently to hand). Serve over the rice.

This is the kind of thing you can throw together briskly when you’re busy, and yet feel like you have cooked something worth eating.

David Thompson would hate it in so many ways. I can’t even tell you.

THAI FOOD is all about authenticity, or as close as you can come with American ingredients. Or probably British, since he says “prawns” instead of “shrimp”. Anyway, you make your own spice pastes, which you do not freeze because that spoils the taste or texture or something, I can’t remember, maybe both. That’s fine, but I’m not going to use the whole can in one recipe. Half is about right for me. And I’m not going to throw the other half of the can away, so that means risking the freezer. Spice pastes seem fine to me after freezing, btw.

I don’t mind making my own curry pastes, though, especially if I have cilantro growing outside so I can find cilantro roots (one common ingredient). Cilantro self-sows madly all along my driveway, so that’s not a problem this year. But hey, not only does Thompson have you making your own spice pastes, he also has you make your own coconut milk! Which is fine, but has always seemed like a lot of trouble to me. No doubt the twentieth time you pry the white flesh out of the husk, you’re pretty efficient about it. I should make my own coconut milk one time and compare. I bet my less sensitive palate can’t readily detect a major difference between fresh and Chaokoh. (And I hope not, since canned is so much, much more convenient.)

Okay, so, what proportion of recipes in this book might I or other normal casual home cooks actually make? I knew you’d ask, so I did a rough count. Most sections (relishes, soups, salads, curries, street food, desserts) contain about 30 recipes. In each section, there are about five or six recipes that I think look both approachable and inviting, though many would have to be altered somewhat. Or a lot, sometimes. Like, check out this one, which I am presenting in slightly simplified form, but this is nearly as Thompson has it:

Yellow Curry of Clams with Pineapple

Put the paste ingredients in your handy Preethi wet/dry spice grinder (making Thai curry pastes is one big reason I bought this grinder and I love it very much). Zap to make a smooth paste, adding a little water if necessary.

Now, of course, authenticity aside, it is plumb crazy to use 25 bird’s eye chilies. I mean, seriously? How about five at most. Thompson does note this is just about the hottest recipe in all of Thailand, so, yeah, if it were me, I would sure tone it way, way down.

Don’t have galangal? Use fresh ginger. You probably don’t have fresh turmeric, but you know what, they do carry it at Global Foods, so if I wanted some, I could get it. But if you don’t have any, maybe a tsp of ordinary ground turmeric would work to make this curry “yellow.”

Anyway, peel and core the pineapple and chop the flesh. Bring the stock to a simmer and add the sugar, tamarind water – yes, you should probably get some, there really isn’t a good substitute. Thompson hates prepared tamarind paste, but I have used both that and made my own by soaking tamarind pulp in hot water and squishing it through a strainer, and if I were in a hurry, I would be fine with the prepared stuff. But it’s not hard to make your own tamarind water from the pulp, either.

Add the fish sauce. Add 2 Tbsp of the curry paste you just made. Add the pineapple and, when tender, the clams. Personally I am unlikely to have access to fresh clams, so I would probably use either frozen mussels (you can get them at Wal-mart, did you know that?) or shrimp. Simmer until the seafood is done. Turn off the heat and add the lime juice. Serve with assorted raw vegetables and lots of rice

You see what I mean about altering recipes.

Other recipes could be made without much fiddling. This one, for example, looks quite approachable as-is. It also looks like it would be really good, but then I’m a sucker for coconut milk.

Sticky (glutinous) rice is not the same as regular rice, so don’t try to substitute. Here’s how you cook it: Rinse the rice thoroughly in several changes of water. Soak overnight or for at least a couple of hours. Drain, rinse, bundle in cheesecloth, and steam in your handy bamboo (or other) steamer for 20 minutes, until tender. It won’t expand like ordinary rice, so don’t worry about that.

Dissolve the sugar and salt in the coconut cream. When the rice is cooked, place it in a bowl and pour the sweetened coconut cream over. Stir. Set aside 15 minutes. Serve warm, with slices of mango. You can use other soft, slightly tart fruits if you really want to, but really, the mango is great with this rice.

You may be asking yourself: Is there any recipe in this book that a normal person could make without special Thai ingredients? The answer is yes. There are a few Chinese-borrowed recipes (fried rice variants and things like that) that anybody could make. But basically, the answer is no. This is a beautiful book, and it’s one from which you can learn quite a bit about Thailand, but the recipes are meant for someone who wants to make real Thai food and is willing to go to some trouble. If you don’t have a place like Global Foods near you, though, you may be interested to know that you can order basically everything, including fresh produce, from Import Foods, an online Thai grocery.

Also, you may like to know that a lot of Thai ingredients store well. You can freeze kaffir lime leaves and cleaned, trimmed lengths of lemongrass. Tamarind pulp stores forever – so does tamarind paste, I think, except I used it up faster so I’m not sure. Usually I grow basil, including Thai basil, though I don’t have any this year. But it is easy to grow and loves hot, humid Missouri summers. It will even self-sow if the winter isn’t too cold.

Dried shrimp and shrimp paste store a long time in the fridge. Fish sauce keeps perfectly well at room temp. I’ve kept rice flour for ages without any noticeable change in quality (thankfully, since I don’t go through it very fast). (Maybe faster now, with this book on my coffee table.) Palm sugar keeps well and can be softened by microwaving for 30 seconds.

So: THAI FOOD is not for just anybody, but for someone who likes Thai food and would like to both expand their range in the kitchen and learn more about the history that gave rise to this cuisine, it’s a great choice. For me, it’s the next best thing to an actual trip to Thailand. I’m usually disappointed in books with titles like “Thai Food Made Easy” or “100 easy Thai recipes”, and this book is the antithesis of those. It’s going to take a long time for me to get bored with this book, either paging through it or cooking out of it.