So, this past weekend was a very busy one for me! I went to something called an International Dog Show, which is run by an organization completely outside the AKC. Some of the judges are AKC judges and some are European or from the UK. They all judge your dogs against the standard for its breed (the perfect Cavalier), and give it a thumb’s-up or thumb’s-down on that basis. I think they judge according to the FCI (European) standard, but I’m not sure — the English, American, and FCI standards for Cavaliers are very similar, so it doesn’t make much difference.

Every judge who thinks your dog deserves to be a champion gives you an “orange card”. When you have three cards, you can send them off with a pedigree and a copy of your AKC registration and poof! Your dog is an International Champion. Doesn’t that sound impressive?

The judges also write out critiques right there at the show and give them to you, so there’s no question what they think about your dog.

Lots of people show in both AKC and the International system. This is Dodger: 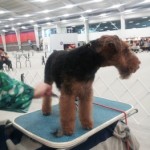 Dodger is a Welsh Terrier who has is AKC Grand Championship plus lots of International-system titles. I think he also shows in Agility. He’s eight years old and a real gentleman with enthusiastic puppies like my Ish. 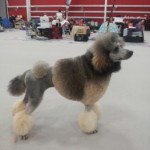 This is a sable poodle — a color not allowed by the AKC. I think it is very attractive! Mind you, I don’t know whether this dog would be competitive in the AKC no matter what color it was. Poodles are very, very competitive. This young bitch’s neck looks short to me, so that she lacks a degree of elegance. If she does have a short neck, probably her shoulder is straight. On the other hand, grooming can be very misleading, so this poodle’s structure might actually be fine. And her color is really snazzy! 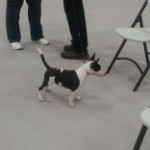 This is a miniature bull terrier. I just thought it was cute! Like a piglet is cute. Lots of pizzazz. Too much dog for me, really, I expect, even though you could tuck it under your arm. All the bull breeds tackle life like enthusiastic cannonballs.

Okay, and look at these “white Goldens”. 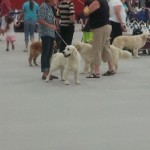 I must admit, I was not impressed by the thirty or so “white” Golden retrievers I saw at this show. Someone around here must be breeding them and they can’t show in the AKC so they are showing at this International show. But . . . it’s not the color, though I expect that isn’t allowed. But any decent judge would have to find a kind way of saying something like this:

“This is a charming dog, and it’s a shame the color is not allowed in the AKC. But I’m afraid that she lacks breed character. She is about half the size of a typical Golden and she has neither a typical head nor a typical coat. A normal person acquainted with the breed would believe at first glance that she is a mixed breed dog. Besides lacking type, she is poor in structure. Her topline is soft and she lacks angulation; she could not be expected to do the work of a hunting dog. I don’t think she could lead any active physical life without eventually breaking down.”

It would be hard to say anything of that kind to people who love their dogs. But all but four or five of the “white Goldens” should have gotten that kind of critique. If the International judges can’t bring themselves to grade a dog as poor, they should not agree to judge in a venue that requires critiques and awards titles. I know one judge, Steve Keating, was a well-known structure and movement judge. I wish I knew how he handled those animals.

Maybe if I get the chance in the future, I’ll deliberately enter a dog that I don’t think should be a champion and see how she is ranked by the judges.

It’s impossible to tell from my experience this weekend, though, because Kenya, Honey, and Ish all DO deserve to be champions! (Ish showed in the Baby class since he is not even five months old!). All three received the highest possible rating from all four judges — I thought possibly Ish wouldn’t, because his bite is a little bit under, but many judges do forgive that in a very young puppy.

I liked the critiques!

Ish’s movement: “moments of brilliance” — hah, yes, he was all over the place; puppies, you know!

Honey’s head: “pretty, feminine” — none of the judges minded the bit of white showing in one eye.

Kenya’s front: “great layback and return — I wish I could consistently put fronts like this on my Great Danes.” — Yes, Kenya and both her daughters and Ish all have excellent fronts.

I really appreciated having four judges take the time to write out what they saw in my three dogs. And it will be nice to have International championships on them while I whittle away those last few single points in the AKC shows.