It’s one of those activities that feels very medieval: making a cordial — really a syrup — with elderflowers. Obviously it’s good for a writer to try things like this (right? Even if you’re putting off writing?).

I’ve made elderflower fritters, too, but to me the cordial is more worthwhile. I think perhaps the fritters are too subtle for me.

Anyway, it’s certainly time to pick elderflowers if you’re so inclined, at least if you’re in Missouri. There will be plenty of flowers around for a couple weeks yet, and those of you with a later spring may have longer than that to lay your plans if you’d like to make this cordial. Elderflowers have a lovely honey-floral fragrance that infuses the syrup. There’s no substitute. 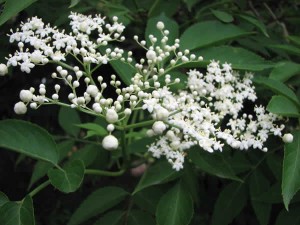 Elderberries are extremely easy to grow, by the way, if you live in zones four through six and have room for a BIG couple of shrubs. They’re quite handsome and prefer a little afternoon shade and moist soil, but they’re tolerant plants. Incidentally, Elderberry ‘Black Lace’ is a lovely ornamental, much tougher than Japanese maples and rather easy to propagate from cuttings, but I don’t know about using the flowers in cordial. I haven’t checked to see if ‘Black Lace’ flowers are fragrant because I have the ordinary bushes for harvesting flowers and don’t need to investigate the ornamentals.

I put my elderberries in about five years ago and they’re good-sized and flower like anything. Very handsome shrubs, even though they’re not meant as an ornamental. Last year I didn’t get around to making elderberry syrup, which is supposed to be good for colds, by the way, so maybe this year. But the elderflower syrup is strictly a taste treat rather than medicinal as far as I know.

Here’s the recipe I used:

30 elderflower heads, picked at nine in the morning, after the air had warmed up and the dew had evaporated and most of the insects were off the flower heads. I picked heads with just a few unopened flowers in the middle and fresh-looking flowers right out to the edges.

Okay, strip the flowers off the stems, leaving behind most of the green stems, which are mildly toxic. Don’t worry about it, for heaven’s sake, just strip the flowers off and leave the bigger stems behind. I suggest you go outside to strip the flowers because you will get little flowers sprinkled all over as you do this. I found only a very few insects that needed to be removed from the flowers, so I do think collecting in late morning was a good idea.

Now, combine the sugar and water and bring to a boil. Cool slightly. Add the lemon juice, lemon zest, and citric acid. The citric acid is to help prevent spoiling, so if you’re going to use the syrup right away, don’t worry about it.

Cover the bowl with a kitchen towel and leave at room temp for three days. I stir the syrup every day, but the instructions don’t say you need to.

Strain the syrup into clean jars and store in the fridge.

You can combine the syrup with ice water or sparkling water for a drink, or just drizzle it over fritters (apple fritters are good) or pancakes. I bet you won’t have any trouble using it up. It does not taste of lemons, by the way. It tastes of the floral-honey elderflowers, only a little sharpened by the lemons.

Elderberry shrubs grow all over the roadsides and at the edges of woods, so even if you don’t have your own, keep an eye out. You can easily nick thirty flower heads without in the least disturbing the handsome appearance of the shrub, so anybody might be willing to let you collect flowers from their plants.

Anyway, now I’ve got to make a note to check for berries in a month or two, hopefully before the birds get them all!