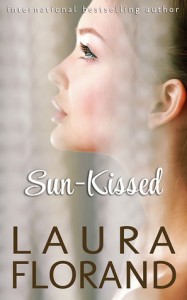 . . . until you have read Florand’s Chocolate romances. In case you don’t have them all straight in your head, these are:

THE CHOCOLATE THIEF — Cade and Sylvain

THE CHOCOLATE KISS — Magalie and Philippe

THE CHOCOLATE ROSE — Jolie and Gabriel

THE CHOCOLATE TOUCH — Jaime and Dom

THE CHOCOLATE HEART — Summer and Luc

THE CHOCOLATE TEMPTATION — Sarah and Patrick

SUN-KISSED — which is a longish novella or short novel — is, in important ways, a gift to fans rather than a standalone story. That’s because it’s set during and right after Jaime’s marriage to Dom, and virtually every main character from the other stories is a guest at the wedding. So we get little glimpses of ALL THESE OTHER CHARACTERS, and I don’t think a reader can appreciate this properly without reading the earlier Chocolate romances first. One of the little tidbits that I especially enjoyed, for example, was the way all the other couples moved to protect Dom and Jaime from the unadulterated attention of the photographers during their first dance at the wedding reception.

Of course SUN-KISSED is sort of a sequel to “Snow-Kissed,” since it focuses on Ann, Kurt’s mother; and on Mack Corey, Cade and Jaime’s father. Ann was a distant character in “Snow-Kissed” — a very intriguing distant character; I was glad to see her again. In earlier books, Mack got a bit shortchanged compared to his own father James, so it was nice to see him pulled into the foreground as well.

Florand is wonderful about creating characters the reader just falls in love with. I’m so happy for Ann and Mack — especially Ann. SUN-KISSED is a delightful, touching story about long-term friendship and about letting yourself fall in love again after loss. It’s a particular pleasure to see a romance where the main characters are in their fifties. This is a lovely addition to Florand’s expanding list of romances.

But read the earlier stories first.