Early last year I read THE BOY AT THE END OF THE WORLD, which unfortunately turned out to be one of those MG books which reads too young for me. I was particularly sorry about this since I’d met Greg van Eekhout at the World Fantasy Convention the year before and was hoping to really enjoy his book, but no.

So I was really interested to see this review by Liz Bourke, a review of a new adult novel called CALIFORNIA BONES. 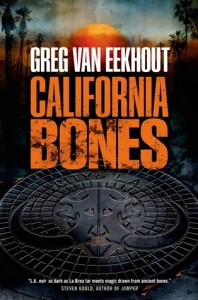 Sounds promising, doesn’t it? From her description, this actually sounds a bit Tim Powers-ish to me. And although it’s the first book in a series, she notes that it stands alone, which is good to know.

Today there’s an interview with Greg at tor.com, by the way.

Anyway, it’s just one of those (many) books on my radar which I may buy any time now but probably won’t read this year. I keep thinking I will have time to take a break in September. Or November. Probably.

2 thoughts on “On my wishlist: CALIFORNIA BONES by Greg van Eekhout”